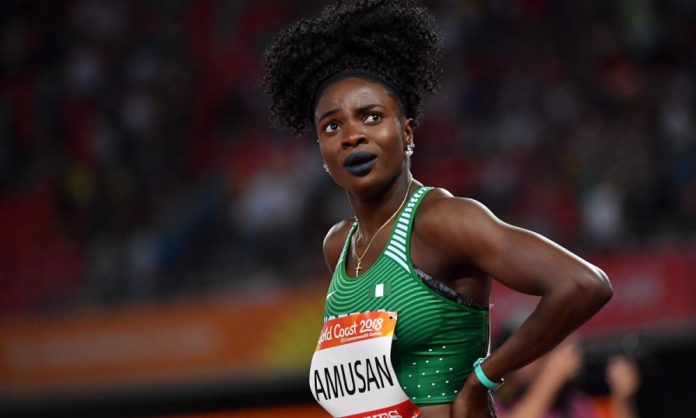 The petit barrier runner, Amusan, in the final race, further lowered the 12.12 secs she clocked in the semi final with another world record  of 12.06 secs. However, she was unfortunately denied the new time as it was achieved above the legal wind recorded at +2.5.

Running in a field that comprised some of the biggest sprint hurdlers in the world, Amusan burst from the block same way as she did in the semi final to hit the finish line in 12.06secs. Jamaica’s Britany Anderson (12.23) and Jasmine Camacho-Quinn (12.23) settled for the silver and bronze medals respectively.

The 25-year-old Nigerian lady has been giving signals of her readiness to become the focal point of the sprint hurdle starting with racing to an African record of 12.40 to win her heat on Saturday.

It was the fastest first-round time in the heat of the World Athletics Championships.

Speaking shortly after the World Record, Amusan gushed: “I wanted to get out and go,” said Amusan. “I did what I had to do. Now I’m looking forward to the finals.”

Even before the final gold medal race which was Amusan’s main target of the night in Oregon, she was guaranteed a bonus $100,000 for the World Record.

She broke the Games record twice in 2019 in Rabat, Morocco. She ran 12.69 seconds to win her semifinal heat before running a hundreth of a second faster in the final to win the gold at the African Games.

Next was the 12.68 seconds Alozie ran twice to win a silver medal at the 2000 Olympics in Sydney, Australia which made her the fastest Nigerian in the history of the quadrennial event.

Amusan smashed that in 2021 in Tokyo with her 12.60 seconds performance which fetched her a fourth place finish in the event.

The reigning Commonwealth Games champion also consigned to history the 12.44 seconds Alozie ran at the Monaco Diamond League in 1998.

The time, which also doubled as the African record at the time was the fastest by any Nigerian in the history of the event until September 2021 when Amusan ran 12.42 seconds to achieve a treble.

African Union Convention on the Protection, Assistance of IDP’s in Africa...