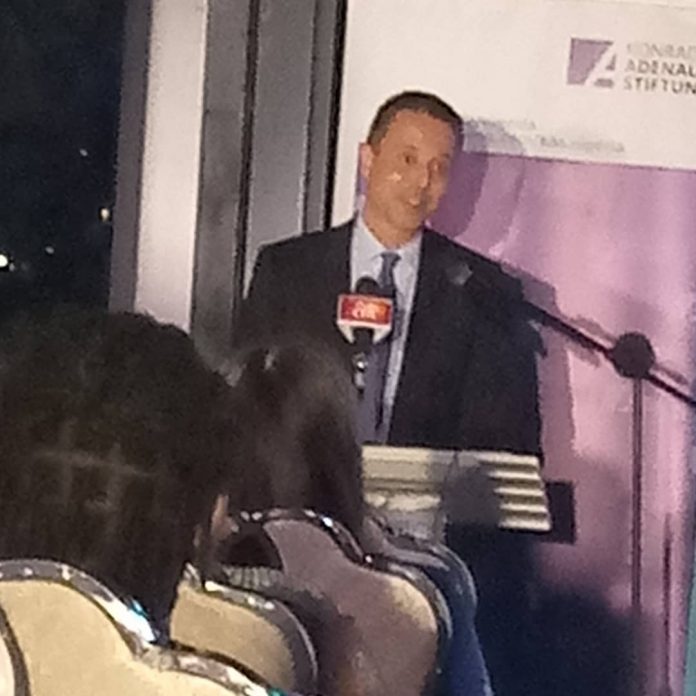 Ahead of the 2023 general elections, the German Deputy Ambassador to Nigeria, Martin Huth, has called on the country to prepared for a dynamic stability.

Huth gave the charge at the occasion to mark the 20 years of Konrad Adenauer Stiftung (KAS), a German foundation, in Nigeria with a tittle: “Democratic Development in the Light of the 2023 General Elections” in Abuja.

The event was also organised to bid the Resident Representative of KAS, Dr Vladimir Kreck, a farewell after serving his term in the country.

The envoy described dynamic stability as “a stability grounded in the need and capacity of both political systems and societies to adapt and to change or to reinvent themselves, including the ability to go through crises and come out stronger.”

According to him, in my view, in our fast-changing, globalised and digital world, this dynamic notion of stability is the only one that counts.

“And here is my main point: such dynamic and resilient stability can only be achieved if and where there is a constant public dialogue on everything that matters and all challenges faced, involving decision-takers, leaders, the public, academia and, of course, the press,” he said.

Huth said as Nigeria prepares for the 2023 general elections, the country should work towards its expectations for the future beyond the holding of free and fair polls.

“As Nigeria is approaching the next presidential and parliamentary elections, allow me to congratulate the country again for more than 20 years of uninterrupted democratic change.

“Nigerians know that there is no way back to undemocratic system.

“At the same time, we would encourage Nigerians to not merely content themselves with the achievements of the past, but to also look at things through the prism of and need for dynamic stability,” he said.

He commended Dr Kreck, the outgoing resident representative, for a good job done.

According to the ambassador, you (Kreck) have greatly expanded the work and scope of the office, and have increased both staff and budget.

He said he would be remembered for his diligence and interest, as well as true sympathy for Nigeria.

The Minister of State for Budget and National Planning, Prince Clem Agba, while speaking on the topic of the event, said democratic institutions vis-a-vis national development serves as persistent and connected sets of formal and informal rules that prescribe behavioural roles, order activities, and shape expectations as democracy constitutes a reliable vehicle for development and modernisation.

“This discussion could therefore not have come at a better time than now that the tempo of political activities has become heightened as the current administration of President Muhammadu Buhari, GCFR, prepares the ground for an orderly transfer of power on May 29, 2023,” he said.

According to Agba, the Nigerian democratic experience has come a long away.

“Since Nigeria’s independence on October 1, 1960, the country has struggled for several decades to develop a fertile ground for democratic governance.

“However, on May 29, 1999, Nigeria became the world’s fourth largest democracy and in spite of the more than 16 years of military rule that preceded that period, Nigeria remains Africa’s most entrenched democratic nation,” he said.

The minister said as Nigeria inches towards the 2023 general elections, the hope is to find ways of making Nigeria’s democracy invariably linked to sustainable national development.

“It is in this regards that the Nigerian National Development Plan 2021 – 2025 is anchored on empowering the people and making them drivers of the processes that will lead to sustainable development,” he said.

He described Kreck as a true friend of Nigeria whose uncommon commitment and dedication to the ideas of KAS is unassailable.

“On behalf the government and people of Nigeria, I congratulate Dr Kreck and again appreciate KAS for your work in Nigeria,” he said.

The Director-General of National Institute for Legislative and Democratic Studies (NILDS), Prof Abubakar Sulaiman, said the 20 years of KAS in Nigeria has, no doubt, made significant contributions to strengthening the capacity of democratic institutions in Nigeria, especially the legislature.

“This has been achieved mostly through structured programmes that include induction programmes at the beginning of new assemblies, annual workshops for state Houses of Assembly and security-based committees of the House of Representatives as well as the provision of technical support to legislatures at all levels and strengthening internal capacity at the Institute,” he said.

Sulaiman said the partnership between the Institute and KAS in the last three (3) years, has been targeted and indeed most impactful as demonstrated by the passage of strategic bills aimed at promoting inter-agency collaboration among security agencies as well as laws that strengthen legislative autonomy and improve governance at the sub-national level.

“All these have, no doubt strengthened democratic governance in Nigeria,” he said.

In his valedictory speech, Dr Kreck, who thanked the guests for attending the programme, said KAS is committed to democratic development and to support democratic forces in Nigeria.

He said the foundation’s support to security sector reforms , the rule of law through capacity building, seminars, etc, to induce a change of attitude for better development is unflinching.

Kagara abduction, pointer to lessons not learnt -By Segun Ige

NUGA 2022: We can achieve peace through sports -Gbajabiamila

How Imam sent out people without face masks from Mosque in...