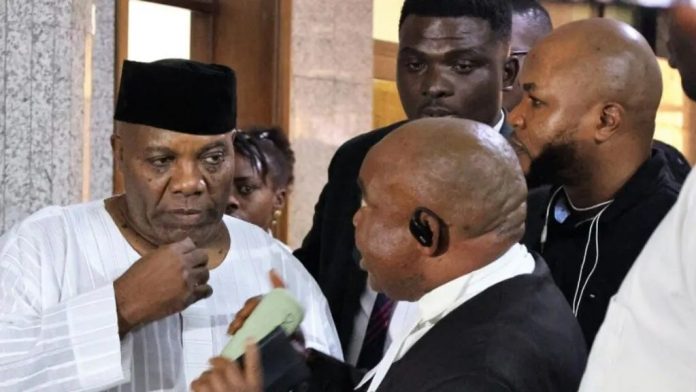 The Director General of the Presidential Campaign Council (PCC) of the Labour Party (LP), Doyin Okupe on Tuesday resigned his appointment.

It would be recalled that Justice Ijeoma Ojukwu of the Abuja Division of the Federal High Court had convicted Okupe, a former Senior Special Adviser to President Goodluck Jonathan for breaching the money laundering Act.

Justice Ojukwu, in a judgment, held that Okupe was found guilty of contravening sections 16(1)&(2) of the money laundering Act, for accepting cash payments without going through financial institution, in excess of the threshold allowed under the Act.

Specifically, he was said to have received N240 million cash from the office of a former National Security Adviser (NSA), Col. Sambo Dasuki (retired).

Consequently, the court sentenced Okupe to two years imprisonment, to run concurrently, or payment of a cash fine of 500,000 on each of the 26 count charges (N13, million) of money laundering preferred against him by the Economic and Financial Crimes Commission (EFCC).

Following the conviction and in a letter to Peter Obi, the Labour Party’s presidential candidate, Okupe, who has since been released after payment of the fine, wrote: “Dear Peter, You will recall that I briefed you yesterday about my personal travails in seeking justice and clearing my name using the Nigerian legal system to pursue same.

“I have invested too much in your campaign to allow my personal travails become a source of distraction.

“In the circumstances, I have opted to step aside and plead that you appoint a new campaign director general, who can continue the assignment with zero distractions. God bless you and family.” Okupe said.

Updated: DSS fails to produce 4 out of detained Igboho’s aides...

EPL gets May 25 restart proposals