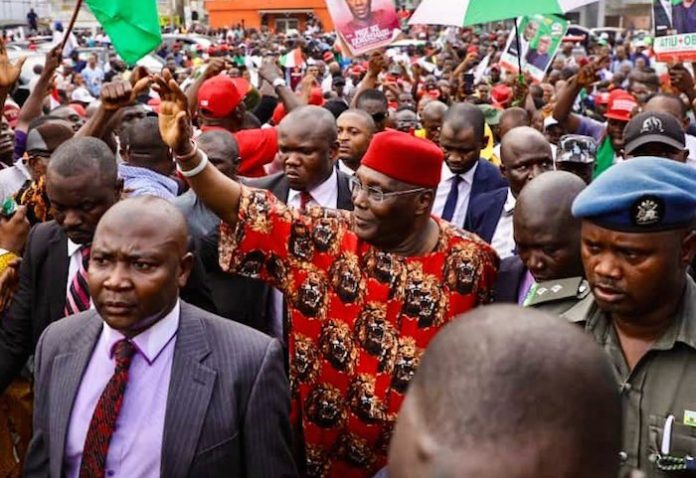 The presidential candidate of the Peoples Democratic Party (PDP), Atiku Abubakar, has assured that businesses and trade will grow if he wins the 2023 presidential election.

Atiku spoke on Saturday at the PDP’s presidential campaign rally at the Dan Anyiam Stadium in Owerri, the Imo State capital.

He said: “For me, it is homecoming to Imo again. The first chieftaincy title I got in the Southeast was in Imo State.

On insecurity, Atiku noted that if elected, he would sit and dialogue with aggrieved individuals to resolve the insecurity problem in the state.

“If you elect me, I will sit with stakeholders and sort out the issue of insecurity. If you elect me, business and trade will pick again. This is part of my policy document. There will be no need for any young man and woman not to have anything to do. We will provide an environment where things can work,” Atiku said.

“We are capable of bringing stable development to this state as we have done before and we would do it again. Look at me, I am still strong and I can do it,” added Atiku.

Also speaking, the Chairman of the PDP, Iyorcha Ayu, warned that the party will lot tolerate division within the party. He assured the people that if Atiku is elected he will bring development to the state and tackle insecurity.

“I brought the good people of Imo a piece of good news. The state is a PDP state. The last election you won. Since 1999, the state has always been a PDP state. All those that left, including Rochas Okorocha, were all PDP. We must ensure unity to win. We won’t tolerate division in the party. We must work together and produce the president on the 25th of February. Everyone must mobilize everyone. Once you win the presidency, we will take Imo back.,” said Ayu.

5G Auction Driven by Pursuit of Better Quality of Life, Not...

Yinka Odumakin: The Exit of A Convinced Humanist -By Rauf Aregbesola