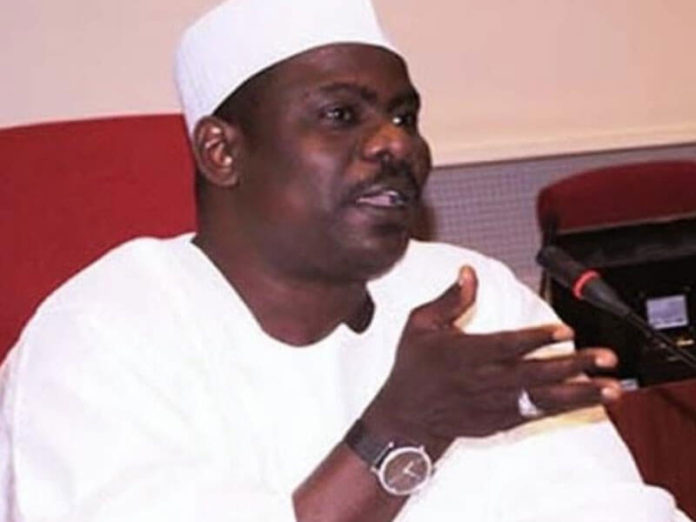 Senator Ali Ndume, on Friday, told the Federal High Court, Abuja, that he did not know the whereabouts of ex-Chairman, Pension Reformed Task Team, Abdulrasheed Maina.

Ndume, who is standing as surety for Maina, told Justice Okon Abang following the ex-Pension boss’ absence in court for the third times which had stalled the ongoing trial.

The News Agency of Nigeria (NAN) reports that Maina and his surety, Ndume, were not in court at the resumed trial on Sept. 29 and the matter was adjourned till Sept. 30.

Maina’s counsel, Francis Oronsaye, had told the court that his client was at Maitama Hospital where he was receiving medical treatment.

Also on the adjourned date, though Ndume was in court to sign the court register in line with the bail conditions, Maina was not in court. The matter was equally adjourned until Oct. 2.

NAN reports that Maina (1st defendant), who was recently released from Kuje Prison nine months after his detention, was arraigned before Justice Abang, on Oct. 25, 2019, by the anti-graft agency, alongside his son, Faisal, and firm, Common Input Property and Investment Ltd.

Although he is facing 12-counts bordering on money laundering, he had pleaded not guilty to all the charges.

At the resumed trial on Friday, Counsel to Maina, Oronsaye, again, told the court that the 1st defendant was not in court, urging the court for an adjournment.

However, Ndume, who represents Borno South in the National Assembly, was in court.

The lawmaker told the court that he was expecting Maina (the 1st defendant) to be in court as well.

The senator, who said this was the first time he would be standing as surety in court, said in as much as he would want to be responsible to his constituency, he would always do this in compliance with the law.

He told the court that he could not come to the court on Sept. 29 due to the Boko Haram attack on the convoy of the governor of his state in which a number of security personnel lost their lives.

He urged the court to give him time to consult with Maina’s lawyer and family to know if he (1st defendant) would guarantee to always be in court in order for him to continue to stand as his surety.

“I want it to also be on record that as a senator, I represent the good, the bad and the ugly of the constituency.

“Right now, my hands are tight,” he said.

When Ndume wanted to make an appeal for a review on the court order to always appear with Maina on each adjourned date, the judge told him that a decision had already been taken on that.

Abang directed the registrar of the court to read out the affidavit deposed to by the lawmaker on May 5 as surety where in paragraph nine, Ndume pledged to always produce Maina in court and forfeit the bail bond of N500 million to the Federal Government should Maina jumped bail.

Ndume said though he understood the affidavit he deposed to clearly, “I want to appeal to his lordship to hear me out.”

According to him, I deposed to that affidavit after the 1st defendant’s wife and his uncle told me that the accuse will always appear in court and will not jump bail.

“I did not foresee this circumstances my lord,” he said.

Ndume said he had expected that each day, he would only produce Maina in court and then proceeded to other national assignments of representing my constituency and the country in general.

“For instance, I am supposed to be at the ECOWAS Parliamemt today, but I am here now,” he added.

He told the court that Maina’s doctor said he was in a hospital on admission.

When Justice Abang asked Ndume if he knew where Maina was, he said: “My lord, I must confess I do not know.”

The lawmaker said he had made effort to track Maina down through the commissioner of police, FCT.

He said the outcome of the police effort to track him down yielded result as they were able to discover his residence in Jabi area of Abuja.

The senator said he had not gone to his house since Maina’s wife gave him assurance that he would be in court for the day’s proceeding.

He, however, enjoined the court to give him time to produce Maina in court.

EFCC’s Lawyer, Farouk Abdullah, opposed the pleas made by Oronsaye and Ndume.

Abdullah said though Oronsaye said Maina was ill and bedridden, the EFCC’s investigation revealed that Maina was not a patient at Maitama General Hospital.

“My lord, staff of the prosecution establishment visited General Hospital Maitama and interviewed the chief medical director and other staff.

“We discovered that the 1st defendant is not a patient of the hospital,” he said.

He said an affidavit dated Oct. 2 and filed same day had been deposed to in respect of the development.

Abdullah, who urged the court to take judicial notice of the events, said the develooment showed that Maina had jumped bail.

“In view of this, we pray the court to so hold and to issue a warrant of arrest against the 1st defendant,” he said, adding that Section 184 of Administration of Criminal Justice Act (ACJA) 2015 empowered the court to issue the arrest warrant “against the defendant who is bound by recognisance to appear before the court and fail to do so.”

He also urged the court to issue a summon on Ndume to show course why he should not forfeit the bail bond and be remanded n a correctional facility, since the lawmaker entered into recognisance before the court to always produce Maina to stand the trial.

“In the event that the surety is unable or unwilling to forfeit the bail bond, we urge this court to remand the surety in a correctional facility pending when he meets the terms of his recognisance before this honourable court,” he appealed.

Oronsaye, however, urged the court to discountenance the affidavit referred to by Abdullah and all the depositions therein.

He disagreed with the EFCC lawyer that the commission was able to confirm that Maina was not a patient in the hospital.

“This court has a discretional power to make such an order in the interest of justice.

“We also believe it is premature for his bail to be revoked and for the surety to forfeit his bail bond,” he said.

The lawyer urged the court to accept the explanation offered by Nduma and to give him time to produce Maina to stand trial.

Justice Abang told Abdullah that his application for the court to summon Ndume was irrelevant since the lawmaker was already in court.

He told him that Section 179(1) of ACJA referred to was out of place.

Abang , however, said that medical report could not serve as a stay of proceeding in criminal matter.

He said though he took a risk in admitting Maina to bail, such gesture should not be seen as act of cowardice on the part of the court.

He also reminded Abdullah that he had, in the last sitting, told the EFCC that if the anti-graft agency was not ready with the prosecution of the case, it could as well applied to withdraw the matter.

He said the warning was due to the manner the EFCC lawyer was conceding to every adjournment plea of the defence counsel.

Abang, in his ruling, said no reasonable excuse was offered for Maina’s absence.

He said he had earlier advised Maina not to jump bail considering the fact that Ndume decided to put his liberty and personal comfort on line to ensure his release.

He said it was disheartening that the situation he forsaw had come to reality.

According to him, the distinguished senator ought to have known if the defendant is a man of his word if truly he is a family friend as he claimed in his affidavit.

“However. the law must take its course as it is no respecter of persons.

“Both the defendant and surety have disobeyed court order.

“But having listened to passionate plea of defendant counsel and distinguished senator, I will reluctantly give the senator another opportunity to produce the defendant.

“Even though the court took a risk to admit the defendant to bail, it was not borne out of cowardice,” he held.

The judge noted that though the prosecution did the right thing to ask for revocation of Maina’s bail and for the surety to forfeit the bail bond, he adjourned the matter until Oct. 5.

He ordered that the surety, who must be in court on the adjourned date, should also ensure that the defendant was in court as well.

“The defendant should not judge himself. He should have a rethink to turn a new leaf.

“I only allowed the distinguished senator to go home today in order to produce the defendant on 5th as he claimed that he did not know his whereabouts,” he ruled.

One dead, as Bandits abduct two catholic priests in Katsina