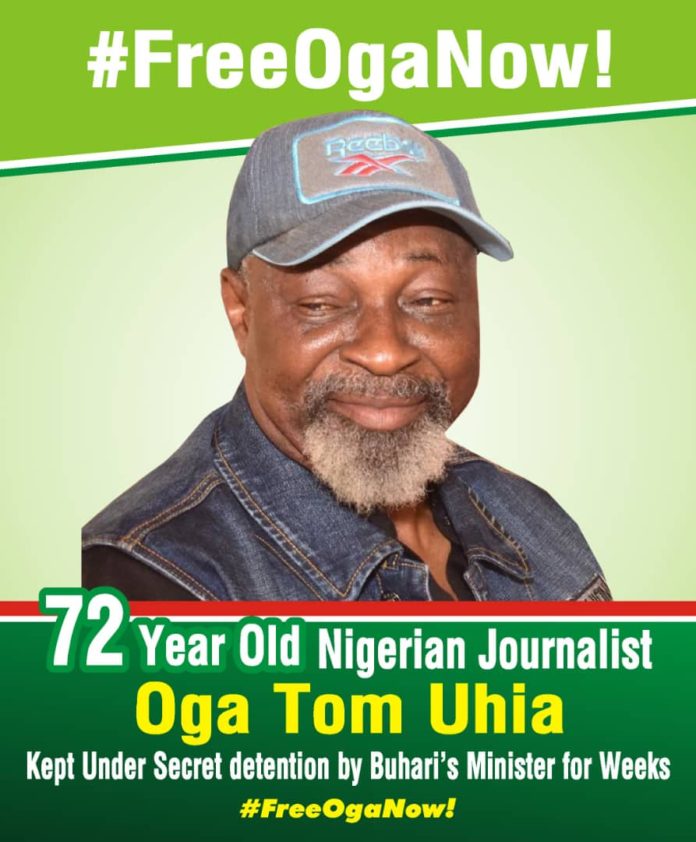 A 72-year-old Nigerian Journalist, Pa. Oga Tom Uhia, has been kept under secret detention by the Nigeria Police for three weeks.

Pa. Uhia’s arrest and detention, it was gathered, was ordered by the Nigeria’s Minister of State for Power, Chief Goddy Jeddy Agba, over a publication in the July 2020 edition of Power Steering Magazine, owned by the detained Journalist.

Despite several interventions from the Nigeria Union of Journalists (NUJ), both from the National Secretariat and the FCT Council, with series of visits to the Honourable Minister, the security agents, acting on the instruction of Chief Agba, has kept the Septuagenarian Publisher in perpetual detention.

A family source disclosed to our Correspondent that, the Police had also severally denied the family Doctor access to the detained Journalist, amidst his deteriorating health.

It was gathered that, the Police pegged his bail conditions to payment of two million naira (N2m) and a level 16 officer in the federal civil service as surety.

“Despite meeting the bail conditions within 2 days, the Police continued detaining our grandfather and have refused to also charge him to court”, another family source disclosed.

Meanwhile, a fundamental human rights enforcement suit has been filed against the Honourable Minister by the Counsel to Pa. Uhia, Barrister Alex Oketa.

In the originating summons, the applicant is asking the court to award him the sum of N100m for his detention from Tuesday, 13th to 15th October, 2020, and his continued detention from Friday, 16th October 2020, after the fulfillment of the bail conditions till date without his arraignment before a court of competent jurisdiction.

Pa. Oga is also demanding for another N10m as general damages for the mental trauma, unnecessary inconveniences, waste of time and expenses occasioned by the Applicant continued detention by the respondents.

Meanwhile, a national Chieftain of the All Progressive Congress (APC), Dr. Garus Gololo, has expressed disappointment over the continuous detention of the ailing Journalist.

Gololo said the action of the Honourable Minister was embarrassing to President Muhammad Buhari’s led federal government and the ruling APC.

In a chat with our Correspondent in Abuja on Sunday, Dr. Gololo said Buhari rose to power on account of his integrity and his stance to always uphold the rule of law, adding, that the Minister’s action was capable of “demarketing” the good policies of President Buhari, “especially, as it concerns the rule of law and sanctity of the fundamental rights of every citizen”.

“The IGP too is not doing well on this. At a time we are talking about reforming the Nigeria Police, a Journalist would be kept for days without properly prosecuting him. These people will not stop to embarrass the government. But I’m happy the party is taking note of all these and will advise the President appropriately”, he said.

Legal Counsel to the detained Journalist, Barr. Alex Oketa, has said the purported warrant of detention displayed by the Nigeria Police was fraudulently acquired from Mararaba in Nasarawa State.

Barr. Oketa who spoke with this newspaper on Saturday in Abuja, wondered why the Police would engage in such a despicable move, just to perpetually keep his client, Pa. Uhia in the secret detention without trial.

“That document was illegally procured and can not be relied upon to continue to detain the Journalist by any reasonable person. It is blatant illegality to use that document to detain my client”, Oketa fumed.

He also noted that, “The name on the detention warrant is not that of my client, (my client’s surname is Uhia and not OHIA as stated in the warrant)”, even as he pointed out that the warrant did not carry the name of Magistrate, neither was it duly filed and with no case number.

“This is ultra vires of the powers of the police and an abuse of power and process of court, aimed at maliciously detaining our client indefinitely.

“We were told that the DIG Anthony Ogbizi is the uncle of Goddy Jeddy Agba and he is detained, in connivance with Jeddy Agba to make our client’s heath deteriorates, eventually leading to his death in detention”, the lawyer added.

Meanwhile, no fewer than 4 Senior Advocates of Nigeria (SANs) and scores of other legal practitioners have indicated interests in working towards securing the freedom of Pa. Uhia.

The pro bono legal framework which is coming at the instance of Idoma Lawyers, would be to strengthen the fundamental human rights enforcement suit currently before an FCT high court, one of the learned sage hinted our reporter, Saturday.

“The Police must not be allowed to mess up our judicial system. We are exploring every legally conceivable means to free our client and get for him a redress.

“Our fundamental rights application is pending and coming up on the 5th of November, 2020, before Justice Peter Affen of the FCT High Court (17), Maitama, Abuja”, another lawyer briefed.

Senate Confirms Appointments of Onochie, 12 others for NDDC Board