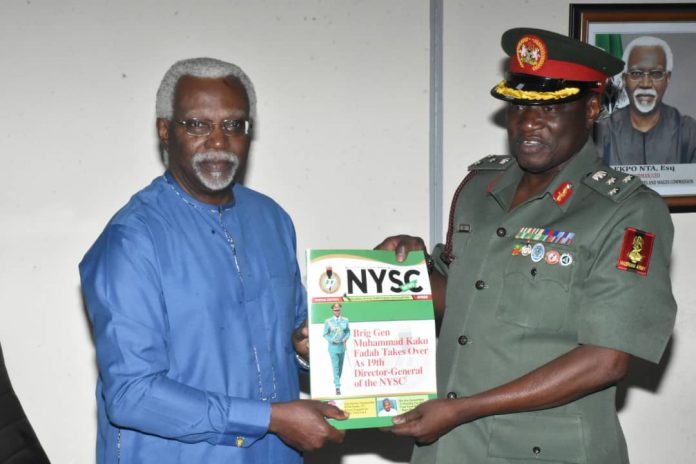 The Chairman, National Salaries Income and Wages Commission, Ekpo Nta has decried the rate of Corps rejection by some employers in the country.

He said every Corps Member must be given enabling environments in their place of primary assignments to contribute their quota to the socio-economic development of the country.

He stated this on Monday when the NYSC Director General, Brigadier General Muhammad Kaku Fadah paid him a courtesy visit in his office in Abuja.

He added that the greatest disservice to any Corps Member is rejection.

Ekpo Nta however appealed to State Governments to provide conducive Orientation Camps with modern facilities to train Corps Members who are deployed to their States in vocational skills that would make them employers of labour.

“Going towards 2023 budget, all MDAs should be required to state in their budget, what they are going to provide for NYSC so that it is statutory and the country can plan with that”, the Chairman advised.

He also condemned the under-utilization of Corps Members, adding that all employers of labour should adhere strictly to the posting policy of NYSC, which covers education, health, infrastructure among others.

The Chairman also described NYSC as one of the institutions that have continuously helped in uniting the nation through the deployment of Corps Members to the nooks and crannies of the country.

In his remarks, the Director General of National Youth Service Corps, Brigadier General Muhammad Kaku Fadah thanked the Salaries and Wages Commission Chairman and his team for assisting the Scheme especially in terms of the upward review of Corps Members’ monthly allowances.

He added that there is the need for every stakeholder to nurture the youths very well and prepare them for higher responsibilities  as good leaders.

He also promised a stronger collaboration between NYSC and the commission.

“The NYSC is a bridge between the youths and the larger society. We thank you most sincerely for what you have done”, General Fadah said.

The Director General added that the NYSC Trust Fund bill has passed though the National Assembly but awaiting Presidential assent.

He said when approved, the fund would make business grants available to deserving Corps Members to start their vocational business in line with the skills they acquired during service.