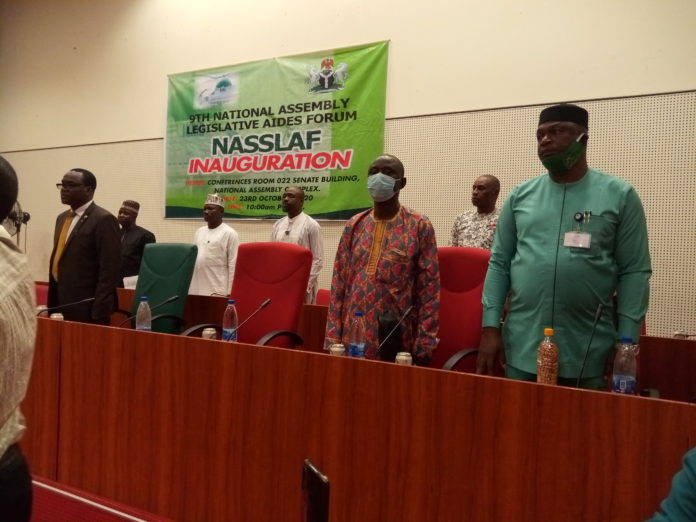 Specifically, the CNA frowned at burglary act allegedly carried out recently by a legislative aide in the National Assembly.

It would be recalled that a legislative aide recently at the House of Representatives, allegedly broke into the office of a Honourable member.

Olatunde spoke on Friday in Abuja during the inauguration ceremony of newly elected executives of the National Assembly Legislative Aides Forum (NASSLAF).

“It is sad to note the ugly incident that occurred recently, when a legislative Aide was caught breaking into the office of a Lawmaker.

“What would have prompted such regrettable incident? There is the need for this newly elected executives to be vigilant by flushing out any bad eggs amongst you”, he said.

He also urged the executive to run welfare – driven Unionism and not  confrontational one  against the management  in any way, since accordimg to him, most of their outstanding demands, were  met within his first 28 days in office  as Clerk to the National Assembly .

“Union matters must witness a new dawn and turn, which must be separated from the ugly past.

“I am proud and elated to state that under my watch , we have fulfilled the promise of the ‘ First 28 Days’ , and we are resolved to make sure that not only all statutory claims of Legislative Aides are promptly paid ,but training programmes are pursued to logical conclusions ” .

The  President of the Senate , Ahmad Lawan who was represented by the Senate Deputy Leader, Senator Robert Ajayi Boroffice ( APC Ondo North) , also tasked the newly inaugurated EXCO to make NASSLAF the required lubricant of  the operational engine of the Federal lawmakers .

In his inauguration speech , the Chairman of NASSLAF, Alhaji Salisu Zuru, promised to run an EXCO and Union that will not be confrontational to the management of the National Assembly at all levels but collaborative .

Our Mandate Is To Collect Taxes, Not To Grant Tax Waivers...