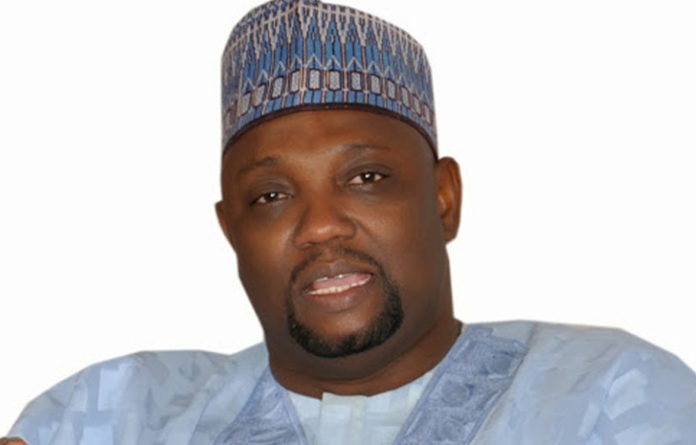 The Patriots for the Advancement of Peace and Social Development (PAPSD) has debunked news making the rounds that a Federal High Court sitting in Abuja had dismissed a N900Billion fraud charges filled against former Governor Of Zamfara State Abdulazeez Yari by the Economic and Financial Crimes Commission (EFCC).

In a statement signed by PAPSD Executive Director Dr Abdullahi Sani Shinkafi in Abuja and made available to the media the group stated that  it’s attention has been drawn to the fictitious news making the rounds on social media and some online news blogs that “Court dismisses EFCC’s N900bn fraud charges against ex-Gov Yari.” This news is fake, both in the headline and in content.

This is as the group stated that the ongoing investigation by the EFCC of the former Governor over allegations of misappropriating N300billion is a vindication of PAPSD demands for investigation of Yari.

He said that “the judge refused to go into the merits of the case in fighting  against   corruption in Nigeria. This clearly displays that the judge is doing selective justice on  members opposition political parties.

According to Shinkafi “It is an absurd misrepresentation of what transpired in the Federal High Court Abuja, today February 4, 2021. It has therefore become imperative for PAPSD to clarify, for the reading public what actually transpired in Court. This is to prevent the gullible and uninformed from being misled by a piece of junk journalism.

“Firstly, EFCC has no pending N900 billion fraud charge against ex-Gov Yari before Justice Okon Abang of the Federal High Court, Abuja. Instead, it was Patriots for the Advancement of Peace and Social Development (PAPSD) a non-governmental organization and its Executive Director Alhaji (Dr.) Sani A. Shinkafi, who approached the Federal High Court since July 21, 2020 with an ex-parte Application for Leave to apply for an Order of Mandamus. It was a public interest suit in which the Applicants sought LEAVE to apply for an ORDER OF MANDAMUS to compel EFCC to investigate the Petitions of the Applicants against ex-Gov Yari, Top Government Functionaries, individuals and Private Companies for alleged Misappropriation of State Funds, Abuse of Office and Conversion of Public Funds and Resources belonging to Zamfara State, up to the sum of over N900billion for Personal Enrichment” he added.

Shinkafi pointed out that “the ex-parte application for Leave was moved before Justice Abang of the Federal High Court Abuja on December 7, 2020. It was adjourned to December 18, 2020 for ruling and subsequently to February 4, 2021. Delivering its ruling today, the Court on its own raised the issue of the Application for Mandamus being statute barred.

Shinkafi noted that “it must be pointed out that the 3 Government Reports listed above were not the basis of the Application for Mandamus. The foundation of the Application for Mandamus was EFCC’s failure to investigate 15 Petitions it received from Patriots for the Advancement of Peace and Social Development (PAPSD) and its Executive Director Alhaji (Dr.) Sani A. Shinkafi.

“The 3 Government Reports were exhibited in the Application to lend credence to the allegations contained in the uninvestigated Petitions of the Applicants to EFCC. Unfortunately, the Federal High Court Abuja, presided over by Justice Okon Abang, relied on the dates of these 3 Government Reports in calculating the 3 months period required to file an Application for Mandamus, under Order 34 Rule 4 of the Federal High Court Rules. The Court did not look at the dates of the Petitions of the Applicants which was the subject matter of the Mandamus. Had the Court looked at the Petitions of the Applicants, the Court would have seen that the last Petition to EFCC is dated July 8, 2020 and was received by the Commission on July 9, 2020. Two weeks later, the suit was filed on July 21, 2020.

He said “in a nutshell, above is what transpired before the Federal High Court Abuja today. We have already directed our Counsel, Ifeanyi Mbaeri, Esq. to take steps immediately to appeal against this strange ruling to the Court of Appeal. The allegations in our uninvestigated Petitions to EFCC against ex-Gov Yari for unprecedented theft of public funds belonging to Zamfara State, cannot be summarily dismissed or swept away by today’s strange ruling by Honourable Justice Abang. Interestingly, recent media reports on attempt to move N300 billion in a commercial bank by Yari, has further lent credence to the monumental theft of public funds in Zamfara State under the ill-fated maladministration of Yari.

Shinkafi vowed that he would go to the EFCC office in Lagos which is already investigating allegations of N300billion against the former Governor to adopt PAPSD petitions for discreet investigation against Yari.
Acccording to Shinkafi, the EFCC operatives quizzed Yari for several hours on Tuesday.

According to Shinkafi, the ex- governor was sighted at the Lagos office of the Commission on Awolowo Road, Ikoyi, at about 11am as he responded to an invitation by the EFCC.A

Shinkafi quoted that sources familiar with the case told newsmen that Mr Yari was quizzed over an alleged attempt to illegally move N300 billion from a corporate account in a new generation bank.

Aregbesola reveals why social vices is on the increase

“There’s a Strategic Plan to Address Infrastructure Deficit in the Telecom...