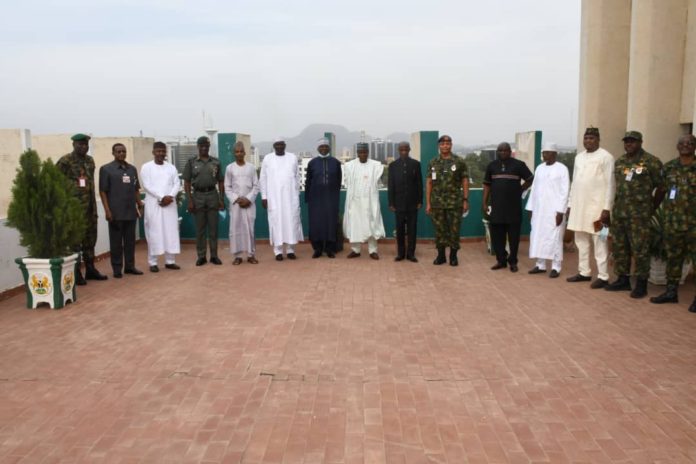 The Minister of Defence Maj Gen Bashir Salihi Magashi (rtd) has promised sustainable funding of the Military Industrial Complex to empower it to perform its statutory mandate.

This according to the Minister will be driven by continously leveraging  Research and Development (R & D) matrix to create the road map for the buy in.

General Magashi made the promise when the Executive Secretary Tertiary Education Trust Fund (TETFUND) Professor Sulaiman Elias Bogoro led members of the Defence and Security Sub-Committee for the proposed establishment of the National Research and Development Foundation on a courtesy call on him at the Ship House, Headquarters Ministry of Defence, Abuja.

A statement by Special Assistant to the Minister of Defence on Media and Publicity, Mohammed Abdulkadri, Sunday night and made available to SINL Nigeria Online quoted the minister saying, R & D is key to actualising National aspiration to becoming self-reliant in the technological driven 21st century world.

The Minister pointed out that Nigeria cannot afford to take the back seat among comity of nations in the efforts to industrialise.

While commending the initiative of Professor Bogoro as the convener of the strategic moves to establish National Research and Development Foundation, the Defence Minister vouched for the Military to continue to take the lead in funding R & D citing  the trajectory of the Defence Industrial Corporation of Nigeria (DICON) in local production of platforms.

He said the Tri -Services have robust R & D Units that are churning out implementable modules that are viable for production of some range of weapons being inducted into the thearters of Military Operations in parts of the Country.

General Magashi said leveraging R & D over a period of time will reinforce National Defence capabilities and serve as force multipliers in the internal and external defence imperatives, hence the need to drum support for the proposed National R & D Foundation.

The Executive Secretary TETFUND Professor Sulaiman Elias Bogoro acknowledged the support of President Muhammadu Buhari and thanked the Minister of Defence for galvanising support for the proposed foundation.

Professor Bogoro said the developed economies of the World are leveraging R&D and  Nigeria as a global player must toe the same path to change the narrative to advance technologically.

He said without grandstanding that the role of the Ministry of Defence is crucial to driving the bill for the envisioned National R&D Foundation to scale through at the National Assembly.

In his remarks, the Coordinator Defence and Security Sub-Committee Air Vice Marshal Onyemaechi Osahor said Military Laboratories in parts of the Nigeria will be figured out and designated as production centers for the production of defence related equipments.

AVM Osahor assured that the Committee is poised to making a difference in churning out implementable R&D strategic templates that will midwife the expected  breakthrough in the production of platforms, using locally sourced materials from start to finish.