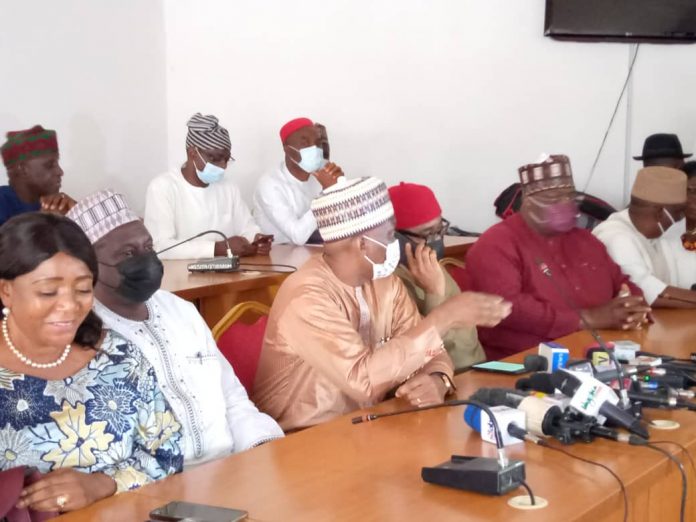 The joint People’s Democratic Party (PDP) caucus at the National Assembly has thrown its weight behind the resolution of the Southern Governors’ Forum (SGF), saying it has vehemently rejected the clandestine moves to manipulate and alter the Electoral Act to remove the electronic transmission results from the law.

Recall, the southern governors met on Monday in Lagos and deliberated on the state of the nation.

According to the caucus, the action followed due consideration and extensive deliberations on political and security situation in the country.

Speaking at a press briefing Wednesday in Abuja, the Senate minority leader, Senator Enyinnaya Abaribe declared that such furtive venture to tamper with a critical component of transparency and credibility of the electoral process is an unpatriotic and mischievous attempt to subvert the democratic process, institutionalize rigging, bastardize and frustrate genuine efforts towards credible elections in Nigeria.

He said “the Joint PDP National Assembly unanimously upholds the resolution of the Southern Governors’ Forum (SGF) in vehemently rejecting the clandestine moves to manipulate and alter the Electoral Act to remove the electronic transmission results from the law”.

He emphasised that electronic transmission of results is the only way to eliminate malpractice and manipulations associated with manual collation of results, including alteration, switching and disappearance of election materials while on transit to various collation centers.

“The Joint PDP caucus is already taking very strong and uncompromising steps to ensure that the provision guaranteeing the electronic transmission of result is not tampered with in any form whatsoever”.

On security, the Joint PDP Caucus reaffirmed its unwavering support for the establishment of state police as well as other measure adopted by the governors to ensure the security of lives and property in the respective states, including those curtailing unauthorizes movements and occupation of forest areas.

“We also affirm the demands by State governors, that as Chief Security Officers in the states, they must be duly informed before any security institution undertakes any operation in their states.

“The Joint PDP Caucus, also lends full support to the demand by our governors that deductions from the Federation Account for the Nigeria Police Security Trust Fund should be distributed among the states and Federal Government to combat security challenges.

Abaribe added that these resolutions by the governors, regarding security does not offend but rather reinforce genuine efforts towards guaranteeing adequate security of lives and property given the current situation in our country as a federation.

Consequently, the joint caucus called on governors, lawmakers and critical stakeholders from other regions to support, what they described as  patriotic initiatives of the Southern Governors’ Forum in the interest of security of lives and property in the country.

“The Joint Caucus agrees with the position of the Governors in rejecting the 3% percentage of share of the oil revenue to the host community as passed by the Senate and supporting the 5% as passed by the House of Representatives.

“As a Joint Caucus, we have set up very strong machinery to ensure that, in the interest of justice and fairness, the percentage of share of the oil revenue to the host community does not fall below expectation”.

The Joint PDP Caucus however commended the Southern Governors’ Forum for the continued patriotic stand in always proffering solutions on critical issues boardering on the security, stability, as well as economic and political well-being of Nigeria at all time.