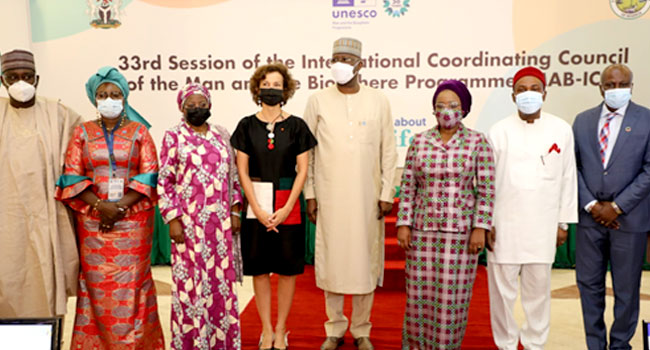 The United Nations Educational, Scientific and Cultural Organisation (UNESCO) has promised to provide financial support through its biosphere reserve fund, to address issues of environmental challenges on the African continent.

Director-General of the organisation, Audrey Azoulay, made the pledge on Monday at the 33rd session of the International Co-ordinating Council of the Man and the Biosphere Programme (MAB-ICC) in Abuja.

She gave an assurance that that UNESCO’s projects on the Lake Chad basin would go a long way to restore the ecosystem which was fast experiencing degradation.

Azoulay, who decried the effect of the environmental challenges, was hopeful that there was still time to make peace with the planet.

“The erosion of biodiversity is no longer a hypothesis, but a fact – one that can already be seen and felt in our everyday lives,” she said.

“Biodiversity is collapsing, at an unprecedented speed. But this collapse is not inevitable; there is still time to make peace with the planet.”

The Secretary to the Government of the Federation (SGF), Boss Mustapha, represented President Muhammadu Buhari at the event.

Just like Azoulay, Mustapha also expressed worries over the attendant effect of the environmental challenges on human activities and the socio-economic development of the country.

He, however, revealed that the Federal Government had embarked on a series of interventions targeted at protecting the ecosystem.

Such interventions, which include tree planting and the creation of national parks and laws, according to the SGF, have reduced the impact of the harmful effect of the biosphere on the people.

The UN Resident and Humanitarian Coordinator, Edward Kallon, also lent his voice on the need to save the planet.

He called on everyone to rise and take responsibility to restore human-nature safe space by taking responsible steps to conserve biodiversity and restore lost resources.

Also in attendance were the Ministers of Women Affairs; Information and Culture; Water Resources; Environment; Science, Technology, and Innovation; as well as the Permanent Delegate of Nigeria to UNESCO and members of the diplomatic community, among others.

The event – the first of its kind in Africa – held weeks after the World Congress of the International Union for Conservation of Nature revealed that there was a global diversity crisis.

It seeks to reconcile humans and nature to demonstrate the possibility of using biodiversity sustainably while fostering its conservation.

How National Executives of APC should emerge -Okorocha