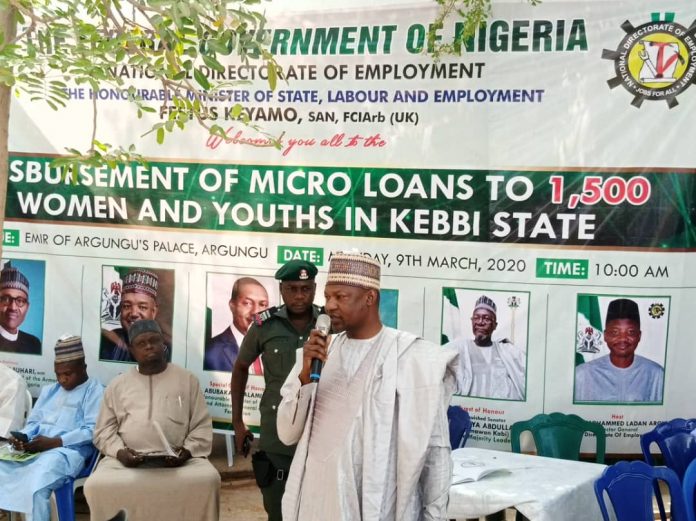 The Federal Government has said empowering Nigerians with macro loans will boost small scale business, saying it is committed to take one hundred million Nigerians out of abject poverty.

Attorney-General of the Federation and Minister of Justice, AbubakarMalami, SAN made the declaration in Argungu at the distribution of micro loans to 1,500 women and youth in Kebbi state.

The event State was organized by the National Directorate of Employment.
This is contained in a statement by Dr. Umar Jibrilu Gwandu, Special
Assistant on Media and Public Relations office of the Attorney-Generalof the Federation and Minister of Justice and made available tonewsmen on Tuesday.

Malami noted that the micro loan given would boost business activitiesin the area especially in view of the forthcoming Argungu International Fishing and Cultural Festivals.

According to him, the Federal Government has consciously anddeliberately come out with a number of schemes to generate employmentand enhance the productivity of Nigerians.

“In addition to facilitating job creation through establishment of new ministries, departments and agencies, the Federal Government is committed to massive employment of Nigerian populace in various Ministries, Departments and Agencies including security and paramilitary sectors”.

According to the Minister, the Federal Government has also provided enabling atmosphere for the thriving and flourishing of private firms, companies, mills and industries of both local and foreign collaborators with a view to generating employment for Nigerians.

The Minister eulogized the contributions of the National Directorate of Employment, Kebbi State Government and Argungu Emirates for boosting the economic activities of the people.