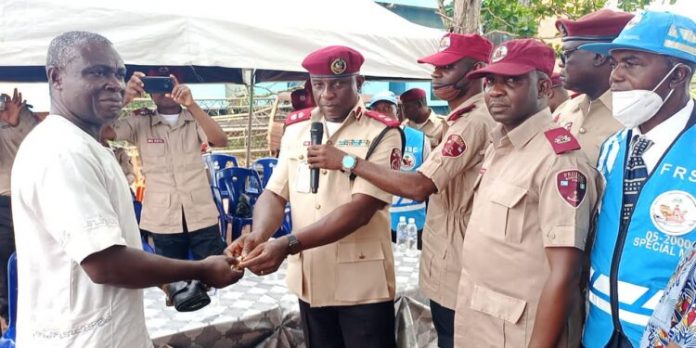 Delta State command of the Federal Road Safety Corps (FRSC) has presented N1,434,715.00 to relatives of deceased victims of accident.

Five persons were killed, with eleven others sustaining varying degrees of injuries in the unfortunate crash.

Sector Commander of FRSC in the state, Udeme Bassey Eshiet, presented the cash the relatives of the deceased victims with staff of RS5.22 Agbor Unit Command, Special Marshals among others as witnesses.

Eshiet disclosed that the money was recovered by his men on rescue mission.

He said the travellers involved in the said accident were members of an Association of Seafoods Sellers in Onitsha who were on a business trip to Ondo State.

According to him, through the help of the Ose Market branch chairman, relatives of those killed were contacted and invited to the command for the presentation.

Meanwhile, chairman of the Association of Seafood Sellers, Mr. Duru Eric Emeka showered encomium on the staff of the command for the show of rare integrity, and prayed for the continued existence of the Corps.

Churches, Mosques to open without restrictions in Ekiti, as govt lifts...

How Gunmen killed three police officers on patrol in Enugu