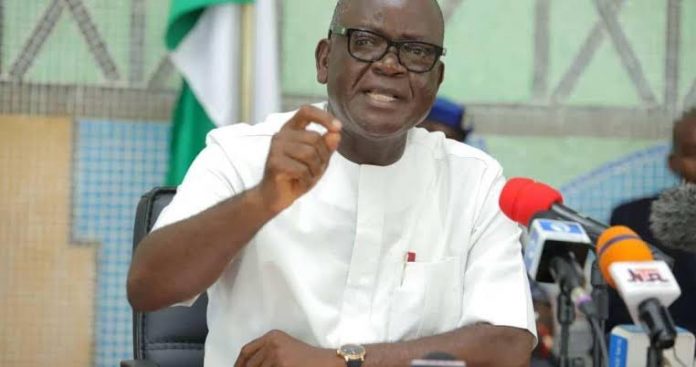 Worried by sustained attacks and killings of citizens of the state by militia herdsmen, Governor Samuel Ortom has declared that henceforth, decisive actions will be taken against the invaders.

Governor Ortom who made the declaration Monday, at the Benue Peoples House Makurdi during a press conference on the state of the nation, hinted that Benue will no longer talk about the number of people killed by the invading militia herdsmen but confront them through community efforts in collaboration with conventional security agents.

“In the last two weeks, more than 20 people have been killed by Fulani terrorists in unprovoked attacks in Guma, Logo and Gwer West, Agatu” which he said had given rise to “the growing number of IDPs in Benue. As I speak, more than 1.5million people are still living in poor shanties as shelter. They have no where to go to.”

He maintained that it is time for “the Federal Government to act fast before they push the citizenry into taking the risk of protecting themselves from these terrorists,” Governor Ortom stated.

The Governor called on President Muhammadu Buhari to resign his position for demonstrating incompetence, abysmal performance, lack of clear direction and height of insecurity in the country.

According to him, “Let me be clear: Buhari’s failure as President has led Nigeria to the most corrupt, disunited, disorganized government in the history of our country. This has brought unprecedented economic hardship, chaos, escalated insecurity where lives don’t matter.”

He lamented that more than three years after Vice President, Yemi Osinbanjo promised the sum of N10 billion for rehabilitation and reconstruction of ancestral homes of farmers destroyed by militia herdsmen, nothing has been sent to the state.

Governor Ortom who accused the Federal Government of nepotism said “Borno State and the North East have continued to receive tons of relief in cash and materials from the Federal Ministry of humanitarian Services and International donor agencies.

He said “just recently, Vice President Yemi Osinbanjo gave marching orders to a committee for the North East. What is the sin of Benue IDPs?”

According to him, “over N1.450billion has been committed to SDG projects across the state. This resulted in the provision of more than 2000 motorised boreholes in various communities in the state. We also have partnership in the 120 Mother and Child Hospital that was recently commissioned by the President.”

The governor disclosed that “the construction and furnishing of 42 Primary Health Care Centres in the State, the opening of more roads in the state; NASME-Yogbo-Udei Branch Road and asphalting of already constructed roads among others” are a few of the many ongoing or executed projects by his administration.

He appealed to Nigerians not to lose faith in governance and assured that “the PDP is set to take over power at the centre and also retain power here in Benue. The current political and legal victories for the PDP in the FCT Council elections, Jos national assembly bye-election seat, and the legal victory in Ebonyi Governorship is a clear indication that the PDP is on its way back to power” he said.

NYSC gets a new spokesperson

Hurdle before next Olubadan of Ibadan, Lekan Balogun as former AG...