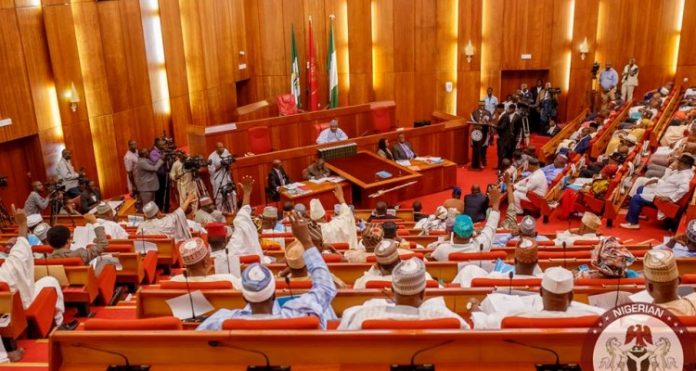 The investigative hearing of Senate committee on Ecology and Climate change with the National Oil Spill Detection and Response Agency (NOSDRA) on Thursday went behind closed doors.

It would be recalled that Chairman of the committee, Senator Hassan Nasiha (Zamfara central) last week ordered the Director General of NOSDRA, Idris Musa to reappear before the committte, following alleged poor and unreconciled presentation.

Specifically, Nasiha threatened to sanction the Forestry and Research Institute of Nigeria and National Agency for the Great Green Wall if they fail to appear before the Senate committte on Thursday.

Indeed, the hearing which was slated for room 117, was suddenly made secret, as the Director General of NOSDRA, Musa was ushered into Nasiha’s office where they met for close to one hour.

However details of the meeting was not made public.

SINL Nigeria Online gathered that the venue initially slated for the meeting was under lock and key, even as newsmen were warned to steer clear of the meeting.

Meanwhile, the two agencies- National Agency for the Great Green Wall and Forestry and Research Institute of Nigeria shunned the Nasiha-led committte.

But speaking to newsmen after the departure of the Director General of NOSDRA, Senator Nasiha exonerated the two agencies who failed to appear, saying “they wrote letters to us, they are out of the country”.

“I have received the report of NOSDRA, and I have kept it, we are going to meet on another day.

“I cannot hold the meeting alone, some members of the committee are not available, we just finished plenary, they are in other function.

“I am not hiding anything” Nasiha added.

Revealed: Why outlawed Vigilante group, Yansakai may clash with bandits in Zamfara