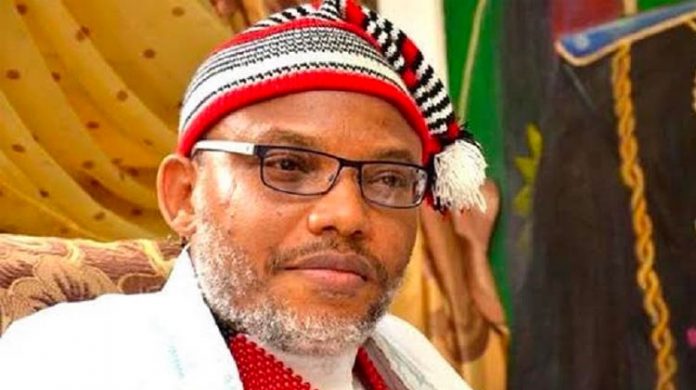 A Federal High Court, Abuja, on Wednesday, dismissed a motion filed by leader of the proscribed Indigenous People of Biafra (IPOB), Nnamdi Kanu, for the Director-General of the Department of States Services (DSS) to give oral evidence on his state of health.

Justice Taiwo said that though there were various modes of commencement of action, including fundamental right cases, he said Kanu (applicant) chose to commence his “under the Fundamental Right Enforcement Procedure Rules that stipulates affidavit evidence.”

He ruled that after carefully perusing all the affidavits of the applicant and the respondents before him, he was of the view that there was no irreconcilable conflicts in the affidavits.

The judge, therefore, declined to grant Kanu’s application and was accordingly dismissed.

Taiwo adjourned the matter until April 13 for the hearing of the substantive application.

The News Agency of Nigeria (NAN) reports that Justice Taiwo had, on March 7, fixed today for the ruling on Kanu’s motion, filed by his lawyer, Maxwell Opara.

Opara, in the application, prayed the court to direct the DSS DG and the IPOB leader to appear before it to give oral evidence regarding the health condition of the latter.

NAN reports that Kanu, through his lawyer, had, in a fundamental rights enforcement suit marked: FHC/ABJ/CS/1585/2021, sued the DG of DSS and the office as 1st and 2nd respondents respectively.

He also joined the Attorney-General of the Federation (AGF) as 3rd respondent in the suit dated and filed Dec. 13, 2021.Opara had alleged that the health of his client was deteriorating in the DSS custody, among others.

Opara had filed a motion on notice dated Feb. 14 and brought pursuant to Section 116 of the Evidence Act.

He argued, in the last adjourned date, that there were conflicts in the counter affidavit filed by the DSS and that only oral evidence of the DG and Kanu could clarify the issue.

“We want to call Kanu and director general of DSS to testify,” he said. But the DSS, through its counsel, Idowu Awo, disagreed with Opara.

He argued that while the judge had powers to call oral evidence of parties, Kanu’s lawyer had not shown how the doctors attending to his client were doing “quack” work.

He further argued that merely stating that the medical doctors his office assigned to attend to Kanu were quacks did not amount to conflict.

“It is important to note that the applicant has not denied the above assertion by the respondents neither has he shown by material particulars that the listed medical practitioners are quacks.

“The onus lies on the applicant via a further affidavit,” he said.
He prayed the court to discountenance the application.

“We humbly urge that the application be thrown away and let us go into the substance of the case,” he said.

Also in the counter affidavit dated Feb. 24, Awo argued that it was a common knowledge that Kanu was currently standing trial on a 15-count charge bothering on terrorism before a sister court.

He also argued that it was a common knowledge that Kanu was earlier granted bail by the trial court, presided over by Binta Nyako, but he jumped bail.

He said he was re-arrested and re-arraigned before the judge.
Awo said that there was no court order in existence anywhere “which is to the effect that applicant (Kanu) should have unrestricted access to his personal physician while in the facility of the 1st and 2nd respondents.

“If there is such order, applicant has the option to produce same in a further affidavit.”

He said that refusal to grant this application would not prejudice Kanu’s case in any way.

The AGF’s lawyer, Simon Enoch, also corroborated Awo’s submission.
He said there was no material conflict in the affidavits of fact submitted before the court.

He prayed the court to reject Opara’s plea.

Ighalo speaks on racism, vows to walk off if abused