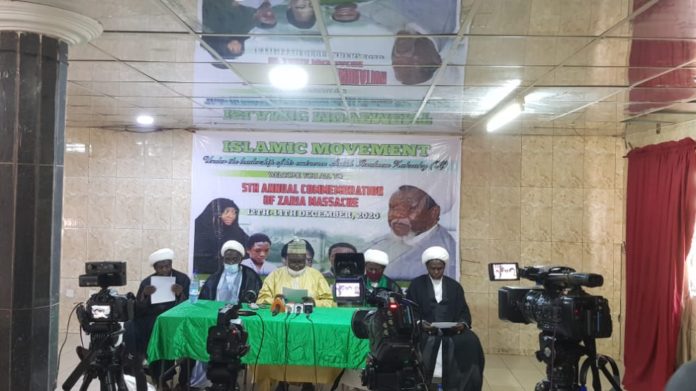 The proscribed Islamic Movement in Nigeria (IMN), on Sunday, called on the Federal Government to repent and stop persecuting its leader, Sheikh Ibraheem El-Zakzaky.

IMN, in a press conference in Abuja addressed by Prof. Abdullahi Danladi from ABU, Zaria, to mark the 5th Anniversary of Zaria Massacre by the military, noted that despite the attack, the group had not taken any retaliatory measure against the Nigerian government.

Danladi said it was time for the public to realise that since the day the Nigerian army fired the first shot against the Islamic Movement five years ago in Zaria, “anything the government touches has come to naught.

“It is as if it has shot itself on the foot the day it shot at the Shiites in Zaria.

“The ‘security reasons’ behind which the government said is the reason why it is persecuting Sheikh Zakzaky has not lead to the peace it has deceived the public with, rather the nation is more insecure now than it was five years ago.

“All its economic policies have crumbled, dumping Nigeria into a hard biting recession. Everybody is today feeling the pinch of its financial recklessness.

“Therefore now is the time for the government to repent, and stop its persecution of Sheikh Zakzaky and the Islamic Movement in Nigeria.

“It should as a matter of urgency release him, his wife and all other Muslim brothers and sister in detention unconditionally.

“Perhaps by so doing, Allah will intervene in the many problems bedeviling this country since the coming of this Buhari regime.

“Allah has commanded us to fear the evil that will befall a nation that has transgressed against it citizens, for Allah does not condone injustice and its perpetrators.

“Peace be upon those who follow guidance,” the Professor urged.

Danladi, who recalled the experience of the killings, said between December 12th and 14th, 2020, marked exactly five years of the Zaria Massacre “perpetrated by bloodthirsty Nigerian army under the order and watch of Buhari regime, where they did all sort of evil and crimes against humanity.

“Within two days they mercilessly and inhumanely massacred over 1000+ innocent civilians for no offence. They butchered many infants and babies that knew nothing other than to be breastfed. They also set ablaze the 70+ year old senior Sister to Sheikh Zakzaky who was in dire need of water to survive.

“During those two days they wiped out 39 families from existence, mercilessly butchered 193 children, murdered 297 women, 548 men and 23 pregnant women, set ablaze hundreds of vehicles in utter show of barbarism and senselessness, mercilessly and inhumanely exhumed corpses of martyrs that were buried at Darurrahma burial ground.

“It was during the period in question that they buried all the corpses of the killed Shi’ah citizens in  mass graves at Mando and other places in Kaduna state without the consent of their families and proper ritual as recommended by any religion and without differentiation between genders, with the worst being some of them were buried alive, begging for water to survive.

“They also demolished worship centers, graveyards and the resident of the leader of the Islamic Movement Sheikh Ibraheem Zakzaky.”

According to him, how can we even forget this catastrophic genocide against innocent souls.

“Indeed till the end of time, Zaria massacre will continue to be remembered by generations to come, just like so many unfortunate massacres before it are being remembered, where the perpetrators are being cursed and the wrath of Allah invoked against them,” he said.

Danladi said it was disheartening that five years on after the massacre, the Federal Government has failed in justifying its inglorious action against the Islamic Movement in Nigeria.

“To cap it all, a Federal High Court sitting in Abuja declared the detention of our leader as alien to any known Nigerian law, hence it ordered for his release, which the Federal Government contemptuously refused to obey.

“Therefore it is clear to all and sundry that Sheikh Zakzaky is in detention courtesy of the dictatorial tendencies exhibited by the ruling elites in Buhari regime as instructed by their Saudi Wahabi masters.

“During these five long years the Islamic Movement hasn’t taken any retaliatory measure, it rather chooses to follow the path of wisdom and knowledge as being espoused by Sheikh Zakzaky in seeking for justice for the victims of this military attack.

“We have been to court against the government and won all of them. We have been staging peaceful protest to press for the release of our leader though at times we have been attacked by the security agents.

“We have been involved in explaining to the public the oppression suffered by Sheikh Zakzaky and the Islamic Movement in the hands of this regime.

“We have also been profusely invoking the wrath of Allah upon our oppressors, and we believe Allah answers the prayers of the oppressed. He, the Almighty, abhors injustice and tyrants,” the Professor concluded.

Open grazing ban: You ‘re not speaking for presidency, Akeredolu tells...