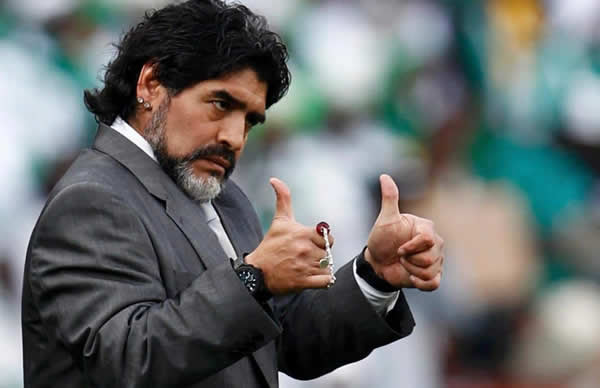 The psychiatrist who was treating Diego Maradona when he died last November has denied any responsibility for his demise, which an expert panel has blamed on neglect, her lawyer said Friday.

Agustina Cosachov “provided evidence that she did not commit a homicide,” her lawyer said after the 36-year-old was questioned at the San Isidro Prosecutor’s Office outside Buenos Aires.

“There is no suspicion to say that the psychiatric medication (that Cosachov prescribed) and in those doses could have caused a deficiency in the heart,” Vadim Mischanchuk added.

The 1986 World Cup-winning captain died of a heart attack at the age of 60, weeks after undergoing brain surgery for a blood clot.

Cosachov and psychologist Carlos Diaz found Maradona dead in bed in a rented house in an exclusive Buenos Aires neighbourhood where he was receiving home care.

Cosachov was questioned for more than six hours at the prosecutor’s office Friday, and presented a voluminous letter before leaving without speaking to the press.

“She was a psychiatric doctor,” Mischanchuk had said as they entered the office. “She had nothing to do with the clinical management of the patient.”

The addiction specialist is one of seven medical professionals under investigation for manslaughter over Maradona’s death in a case that has gripped Argentina.

According to the investigation record, Cosachov and neurosurgeon Leopoldo Luque, 39, were the key personnel in charge of Maradona’s care.

The phase of questioning suspects will finish next Monday with Luque appearing before prosecutors. He has also repeatedly denied any blame.

In the next phase of the investigation, a judge will decide whether or not to order a trial.

If found guilty at the end of the process, which could take years, the seven risk between eight and 25 years in prison. All are barred from leaving the country pending the outcome.

– ‘They killed Diego’ –
Prosecutors opened an investigation after a board of experts looking into the footballer’s death found he had received inadequate care and was abandoned to his fate.

“In the end, there were many warning signs that Maradona was going to die, give or take a day. And none of the doctors did anything to prevent it,” attorney Rodolfo Baque said at the time.

Psychologist Diaz, 29, has — like Cosachov — denied the psychiatric medication Maradona was taking had worsened his heart condition.

As well as Diaz and Cosachov, four other people under investigation have given testimony so far: Madrid and fellow nurse Ricardo Almiron, 37; nursing coordinator Mariano Perroni, 40; and medical coordinator Nancy Forlini.

Two of Maradona’s children blame Luque for their father’s deterioration after the brain operation.

A panel of 20 medical experts convened by Argentina’s public prosecutor said last month that Maradona’s treatment was rife with “deficiencies and irregularities” and the medical team had left his survival “to fate.”

All have denied responsibility for the death of Maradona, an idol to millions of Argentines after he inspired the South American country to their second World Cup triumph, in 1986.

The former Boca Juniors, Barcelona and Napoli star had battled cocaine and alcohol addictions for years, and was suffering from liver, kidney and cardiovascular disorders when he died.

We are leaving no child behind… Kwara Gov

Bandits who brought down fighter jets, not ordinary bandits -Reps