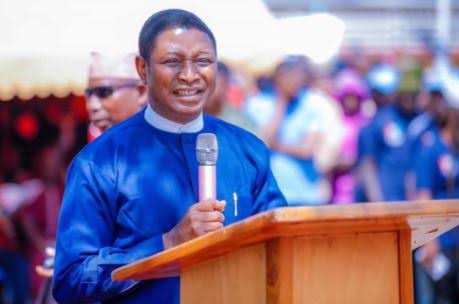 The Executive Secretary, Nigerian Christians Pilgrim Commission,  NCPC, Rev. Yakubu Pam on Friday called on Christians to rise up and not to remain where they are, saying the mission of Jesus Christ through his birth was to restore human dignity and establish his kingdom here on earth.

According to Rev Pam, “Christmas is a period of burden sharing”. Just as Christ took our burden and nailed them to the cross so “are we expected to be burden sharers”

He said today Christians have strayed away and are engaged in frivolities, talking against each other rather than building one another.

“We are in an era of talking about people, instead of engaging in caring for one another.

“The mission of Christ is to restore us like the prodigal son who was lost but returned back to his senses.

“The prodigal son was celebrated because his hour came. No matter your situation, whether you’re dirty, unkempt or a thief,  your hour will come.

“Let us learn to put Jesus first as this is our season of grace. Rise up and don’t remain where you are”, he said.

According to the NCPC boss, God has been helping the Commission in her commitment in delivery it’s mandate.

He told the gathering that the Commission was planning to airlift 10,000 Christians to Israel and Jordan, saying so far about 3400 pilgrims from four states have indicated interest to attend this year’s pilgrimage in February 2022.

“We are gaining grounds in our mobilization as we have visited Lagos, Enugu, Bauchi and Imo states.

“We are visiting Katsina and other states before the end of the year. He said the target to mibolize 10 thousand pilgrims for this year is gaining grounds.

“The meeting today with the governor of Bauchi was beneficial and successful” he added.

BREAKING: WHO official, Lagos-returnees test positive for COVID-19 in Bauchi

120,000 Nigerian Children die of Pneumonia annually -Save the Children