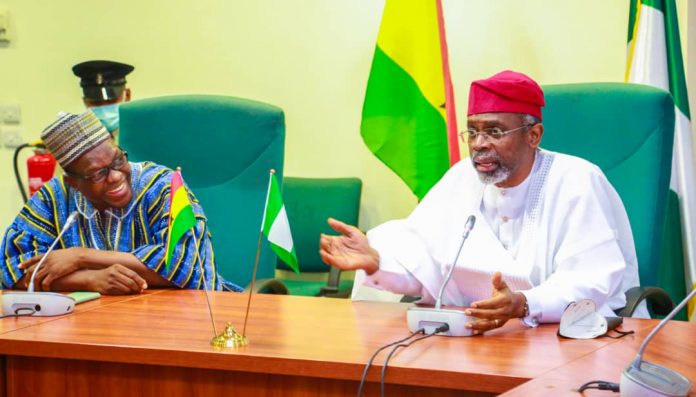 Nigeria and Ghana have put in place a mechanism to end the trade dispute between Nigerian traders and the Ghanaian authorities, the Speakers of the Parliaments of the two countries have said.

The dispute arose from the $1million business participation fee introduced by the Ghanaian authorities, required of foreigners to pay before they can do business in Ghana.

Speaking at a press conference after a closed-door diplomatic meeting in Abuja on Wednesday, Rep. Femi Gbajabiamila and the Speaker of the Parliament of Ghana Hon. Alban Sumana Bagbin, said the trade dispute would soon become history.

“We got assurance from both sides that the issue of trade dispute will be a thing of the past. We’re now putting up a mechanism to make sure that these issues don’t come up again in the future”, Hon. Bagbin said.

Earlier, Rep. Gbajabiamila said the closed-door meeting they held was a successful one as issues of interest to both countries were discussed.

“There is a technical committee set up. They will be going to Ghana next week to dot the ‘Is’ and cross the ‘Ts'”, he said.

Gbajabiamila also announced that the two parliaments had established and inaugurated a parliamentary friendship group that would hold talks on the relationship between the two countries.

He spoke more, “We’ve inaugurated the friendship group, and they will start talking on behalf of the two Parliaments.
“I want to thank you, the Hon. Speaker, for your kind words and your determination to see an end to the issue.

“The issue of the Nigerian embassy in Ghana, the Ghanaian authorities have accepted to take responsibility, though it has nothing to do with them, but they said they will put it back.

“We went beyond Nigeria-Ghana relationship. We also talked about CoSAP. Other issues will be addressed by the two friendship groups.”

Responding, Hon. Bagbin said: “I want to sincerely thank you so much for the invitation. I can only confirm that everything will be put in place to address the issue of trade between our two countries.

“Let’s ensure that the relationship between Ghana and Nigeria remains cordial and mutual. I thank the Speaker for his commitment and enthusiasm on this matter.”

Earlier, Hon. Bagbin addressed members of the House at plenary, where he said Ghana and Nigeria had come a long way and that the relationship between the two countries would continue to be cordial and mutual.

Similarly, our relations have had its own challenges every now and then.”

However, he noted that the two countries had been able to address whatever issues that came up between them in the past and that they should be able to do that currently.

He gave details, “The issue of Nigerian traders in Ghana; it is on this basis that I commend my brother and colleague, Rt. Hon.Gbajabiamila, and my predecessor, Rt. Hon. Professor Aaron Michael Oquaye, for their noble efforts in pursuing Parliamentary Diplomacy towards finding a lasting solution to the trade impasse between some Ghanaian and Nigerian traders in Ghana.

“The conclusions you arrived at, which were encapsulated in the joint communique issued after the visit, provided the basis for redefining our relations, in terms of our history of cooperation, to forge a better future for the citizenry of our two nations.

These conclusions were reinforced by the communique issued after the recent meeting between our ministers responsible for Trade on the sides of the Extraordinary ECOWAS Summit on the Political Situation in Mali held on 31st May 2021 in Accra.

“Rt. Hon. Speaker, I am here just to help bring finality to the impasse. I pledge my commitment and that of the Parliament of Ghana, to contribute in every way possible to end the impasse between traders of our two sister countries.

“In furtherance of that, under my leadership, the Parliament of Ghana has appointed a seven-member committee as Ghana’s delegation to the Joint Committee of Eminent Persons of our Legislatures. They will interact with their Nigerian counterparts towards passing the ‘Ghana-Nigeria Friendship Act.’

“The Act will set up the proposed ‘Ghana-Nigeria Business Council’, which is intended to provide the legal and institutional framework to sustain the continued friendship and business interests of our people.”

He also appealed to “review the prohibition list banning the importation of specific goods and commodities into the Nigerian market from other countries, including Ghana. This request is underscored by the resolution as captured in the communique of 31st May 2021 referred to supra.”

REVEALED: PenCom recovers over N17.05bn from 655 employers in 8 years