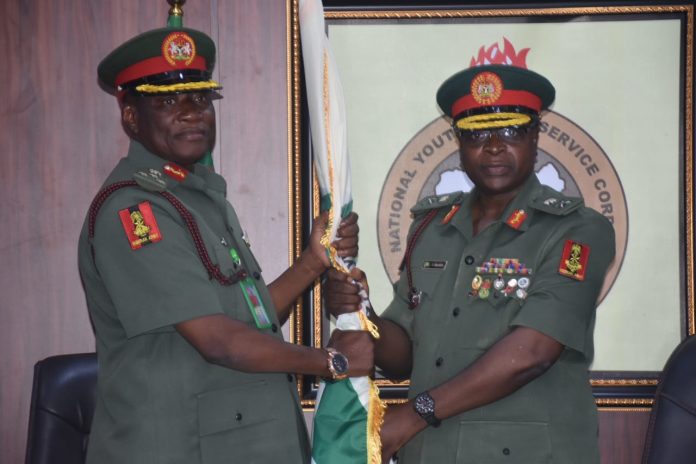 Brigadier General Mohammed Kaku Fadah, the newly appointed Director-General of the National Youths Service Corps (NYSC) officially assumed duty on Wednesday as the 19th Director General of the service, with a vow to continue with on going projects of his predecessor.

SINL Nigeria Online reports that Fadah, while receiving the mantle of leadership from the former NYSC boss, Major General Shuaibu Ibrahim, at the NYSC headquarters in Abuja, said he would sustain the objectives of the scheme.

He sought for the cooperation of the management and staff of the scheme, saying “let us work like one family”.

Fadah, expressed gratitude to President Muhammadu Buhari for finding him worthy of the appointment, even as he poured encomium on his predecessor, Maj.Gen. Ibrahim.

“Maj. General Ibrahim has left a big shoe, he was my course mate, we will make sure we pursue his on going projects to conclusion.

“I seek for your cooperation and hope you extend to me the cooperation you gave Major General Ibrahim” he said.

Earlier, the former NYSC boss, urge management and staff of the scheme to give the NYSC Director General maximum cooperation.

He thanked the NYSC and corps members for the excellent relationship they accorded him when held sway as the head of the scheme.

To the management and staff, Ibrahim said “The welfare of corp members should be paramount, we cannot be here if corp members are not here”.

High point of the event was the presentation of flag to the new NYSC boss and signing of documents to signify official assumption of duty by Brig. Gen Fadah.