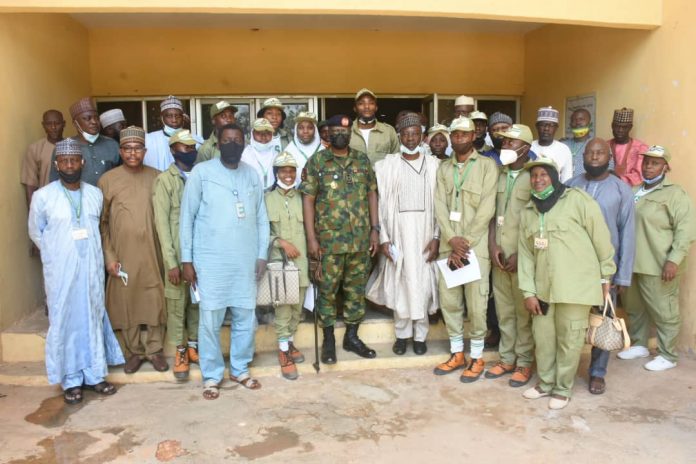 The National Youth Service Corps has signed a Memorandum of Understanding with the National Cereals Research Institute (NCRI), Badeggi, Niger State, on the training of Corps Members and Staff on modern farming methods.

Mrs. Adenike Adeyemi, Director, Press and Public Relations in a statement on Monday said the formalization of partnership by the two agencies comes as NYSC is revamping its agricultural programme in line with the Federal Government’s policy on diversification of the economy.

NYSC Director-General, Brigadier General Shuaibu Ibrahim, said the Scheme was tapping the potentials of Corps Members for the promotion of agriculture with a view to contributing to the nation’s drive towards self-sufficiency in food production.

He remarked that the partnership would add value to the existing initiatives of the Scheme aimed at empowering Corps Members for self-employment, adding that opportunities were already being provided for them to acquire skills in various vocational areas through the Skill Acquisition and Entrepreneurship Development Programme, which was introduced in 2012.

“NYSC is a proactive agency that encourages Corps Members to be self-reliant instead of seeking for salaried jobs”, he said.

The Director-General said Corps Members were being encouraged to avail themselves of various empowerment opportunities, including the Federal Government’s Seventy-Five Billion Naira Youth Investment Fund and the National Young Farmers’ Scheme.

He said a proposal had been made for the establishment of a National Youth Service Trust Fund, adding that if actualized, the fund would, among other things, help in making the skill and entrepreneurship programme of the Scheme more functional while also serving as a source of business financing for Corps entrepreneurs.

He stated that the institute had trained a lot of women and youths on improved agricultural practices, including the production of high yielding, weed and pest resistant crops.

“We are ready to partner with NYSC, and l wish to assure that we will not let you down.

“This MoU will enhance the efficient usage of limited human and material resources that will improve productivity”, he said.

Malami speaks on Nigeria’s war on Corruption, says it is non-discriminatory