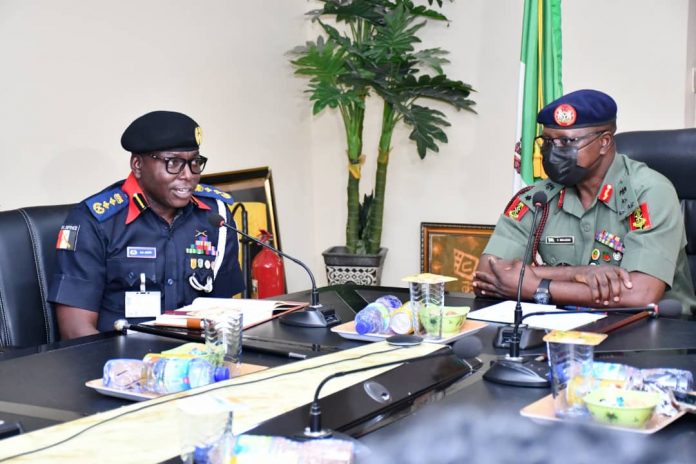 The National Youth Youth Service Corps (NYSC) has said it would strengthen its existing synergy with the Nigeria Security and Civil Defence Corps (NSCDC) in ensuring maximum security for Corps Lodges and NYSC Farms across the country.

It stated that in deepening the partnership, security would be provided for NYSC farmhouses, alongside other ventures of the Scheme.

NYSC Director-General, Brigadier General Shuaibu lbrahim in a statement by Director Press and Public Relations, Mrs. Adenike Adeyemi stated this when he played host to the Commandant General of Nigeria Security and Civil Defence Corps, Dr Ahmed Abubakar Audi who paid him a courtesy visit in his office in Abuja.

Ibrahim who said all stakeholders must rally round Corps Members, described them as critical national assets that must be protected.

He disclosed that the Scheme has partnered relevant agencies, as well as transport unions, in addition to sensitising Corps Members on the need to take their safety more seriously and also avoid night journeys.

He revealed that Corps Members have been advised to break their journey if it is going beyond six in the evening and pass the night at the nearest police station, Nigeria Security and Defence Corps formations, or military barracks, including NYSC Secretariats, palaces, among other secured places.

The Director-General commended the NSCDC for introducing agro-rangers and female squad in the Corps.

He added that the Scheme has also resuscitated its farms in order to train Corps Members that have passion for agriculture; but needs the assistance of NSCDC to ensure their safety while on the farms.

He lauded the Corps for its relentless efforts in tracking and arresting cybercriminals in the country.

Speaking further, Ibrahim commended the NSCDC personnel for their enthusiasm, commitment and resilience during Orientation programmes, adding “We want the Civil Defence Corps to be involved in tracking and prosecution of cyber criminals that may want to infiltrate our mobilisation process.

We will also like to sign an MoU with the NSCDC so that we can interface with you.

We will also appreciate if you can make your personnel available to secure our Corps Members so that they can leverage on the advantages of our farms and this requires protection”, he said.

The Commandant General of Nigeria Security and Civil Defence Corps, Dr Ahmed Abubakar Audi, said there is need for credible intelligence that will help the Corps in the discharge of its responsibilities.

He promised his readiness to strengthen the existing relationship between the NYSC and NSCDC.

The Commandant General said the NSCDC has been providing security for agro-allied investments in the country, especially the farmers.

He added that the three basic responsibilities of the Corps include; protection of critical assets and government infrastructures, disaster mitigation by assisting victims, and registration, licensing and monitoring of private guard companies.

“I am here to strengthen the existing relationship between NYSC and NSCDC. We must come together and we are ready to strengthen our collaboration” he said.

The NSCDC Commandant General and other members of his entourage were led by the NYSC Director-General on a tour of the newly established NYSC Museum before their departure.

OPINION: The place of culture in civilisation -By Usman Baba

‘I’ve been receiving death threats since I came on board’, says...