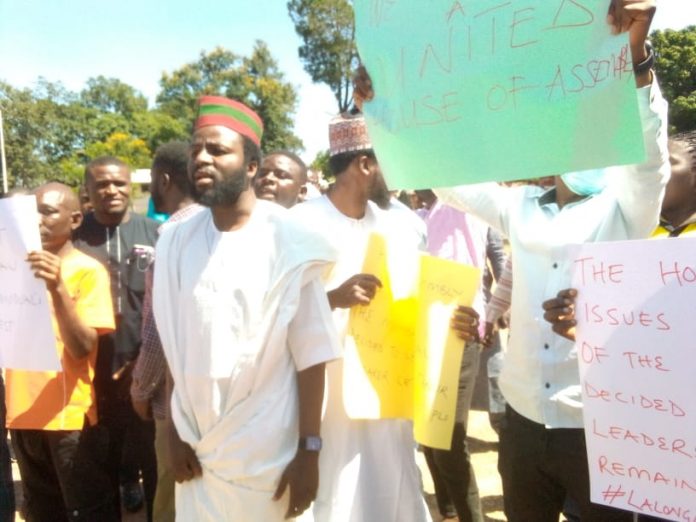 Plateau youths on Friday staged a peaceful protest to demand members of the State House of Assembly to close rank on the leadership tussle rocking the House.

The youths said the call was in the interest of peace and development of the state.

The youths who converged on the State House of Assembly Complex under the umbrella of APC Youth Online Forum urged the members to put aside their difference and forge ahead with legislative activities that will promote peaceful co-existence.

Saminu Maigoro, Chairman of the Forum said the leadership tussle and the rancour was very unfortunate and unnecessary.

He said “we are actually here today in solidarity with the state, we feel all these misunderstanding in the Plateau State house of Assembly is not necessary.

“There are alot of issues that needs to be tackle with understanding like the proposed budget in the Plateau house of Assembly that is still pending.”

He charged the Legislators to unite in the interest of the people, noting that the state is greater and bigger than any individual.

“We join the people of the state in telling members of the House to maintain status quo, the issues that borders on legislature should be left to the legislators and issues for the Executive should be left for the executive to tackle.

“We feel that the future of our state should not be jeopardized for any other person’s personal interest.”

Pamela Ibrahim who spoke for the women stressed “we are soliciting that the House members should unite themselves for the interest of Plateau and we are asking each and everyone of them to come together as one.”

Also speaking, Prince Rotdunna Seken noted that changing the House speaker was a legislative business, therefore the electorates should allow the House members to carry out their duties effectively.

“The embattled House Speaker, Abok is a Christian, let me correct this notion, it is not a religious issue I discovered that YOUTHCAN Plateau State chapter wrote a letter that it is a fight against Christianity.

“Plateau State House of Assembly is a combination of both Christian and Muslim and they should work together for the people who gave them the mandate.

I had no issues with Keshi…says Uche

Obasanjo speaks on Dimka coup, reveals how Bajowa saved him from...