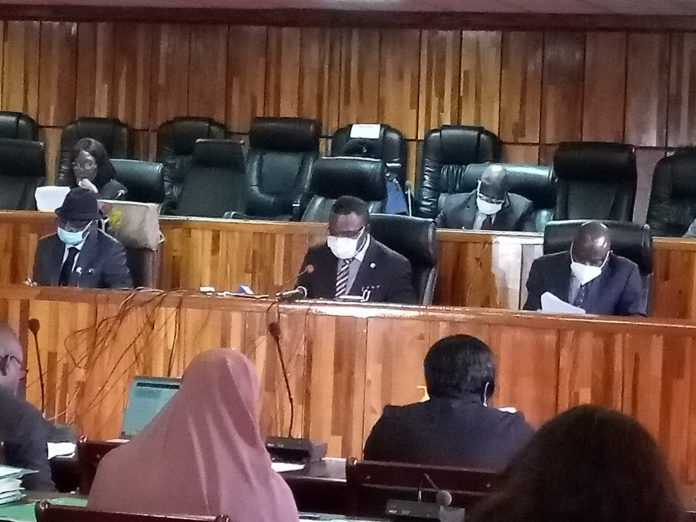 His appearance followed a summon to clear the air on the cause of death of late Ifeoma Abugu whom the police alleged died in custody as a result of substance abuse.

Dr Abimiku in his analysis of the autopsy result he conducted on the late Abugu before the Justice Suleiman Galadima(retd) led panel, stated that from his preliminary autopsy examination he noticed that her fingernails, lips and tongue were bluish, indicating that she had respiratory problem before she died.

Explaining further, the pathologist said there were bruises on her knees.
According to him, a cursory look at her organs revealed that there was accumulation of fluid in her lungs causing pulmonary congestion.

“Examination of her kidney also revealed noncancerous cyst, multiple fibroid in her uterus and virginal swab showed dead sperms deposited in her body”.

Continuing, he said in his thorough investigation of the cause of death as alleged by the police, he did a toxicology test to ascertain the allegation that she died from drug ingestion.
He said he did this by way of testing her body fluids for all the eleven drugs commonly abused, like rohypnol diazeperm barbiturate, marijuana, narcotic, cannabis, tranquilizers, amphetamines etc and all results came back negative.

To rule out all doubts, Dr Abimiku informed the panel that he further tested the late Abugu specifically for cocaine and still the result came out negative.

The pathologist disclosed to the 11 man investigative panel that the cause of death of Abugu was Anoxia, a medical condition caused by a decreased or lack of oxygen supply to the lungs

“And this can come about as a result of strangulation, choking or suffocation “he added.

Under cross examination, the counsel to the respondents James Idachaba tried to discredit the report by alleging that the autopsy result was in contention because his respondents sought for second opinion on the result therefore he alleged the autopsy lacked integrity.

The doctor responded by saying “Autopsy result does not favour anybody, it is meant to establish the cause death”.

Although the autopsy was done at the instance of the police, the panel members asked if the period of death and the time autopsy was conducted could change anything, however the pathologist answered in the negative saying longer period can only make dissection difficult.

But he was quick to add that the “virginal swap result if done early could have made a DNA of the sperm found in her possible; however that cannot be possible because sperm can only live for 72 hours in a woman’s body”.

On the circumstances that led to the autopsy which was conducted by Dr Abimiku, he informed the panel that, the IPO alleged that Abugu’s fiancé was a suspected drug dealer and when they went to arrest him on the 10th September, 2020 they met her at home, who he also claims was into sale and consumption of drugs.

She was then arrested and she later died in police custody on the 11th of September, 2020 of alleged drug overdose.

In a bid to establish her cause of death, she was taken to the hospital on the 25th of September 2020 for autopsy.

In his response, the chairman of the panel ordered the immediate release of the corpse to the family for proper burial rites, and the case was adjourned to 24th March 2021 for the police to open their defence.

It will be recalled that the case was part heard in February 2021when Afam Ugwunwa, the fiancé, testified before the panel that she died in custody of the police.

Afam also said that the police alleged Abugu died of drug abuse, while the autopsy states that she died of anoxia.

It was as a result of the discrepancies between the police and the complainant that informed the decision of the panel to summon the Chief Consultant Pathologist who have now given a medical account of the circumstances of her death.

Sudan to hand ex-president, al-Bashir, others to ICC