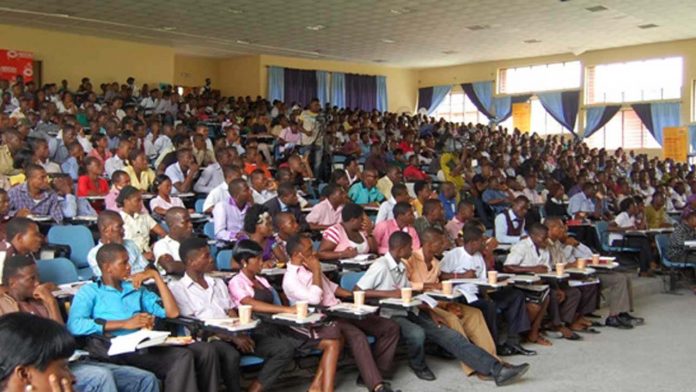 We must allow Ian Morris to tell us why the Industrial Revolution took place in the British Isles rather than France. The lesson we take away will inspire us to unshackle our public universities for greater productivity.

In the past six months our institutions of learning shut doors on account of poor funding and crippling red tape. Within the same period, government generously flew over 40,000 pilgrims to holy lands. The readiness of Nigerian leadership to fund religion and holy men while denying same to universities and scholars means Nigeria could decay on all fronts.

To reverse things, our universities must have alternate funding out of control of unconcerned politicians. We aim to work out ways and means for these schools to fund themselves through internally-generated revenue.

How Britain Beat France
Scholars in Medieval and Renaissance Europe were funded by rich patrons and nobles. On the cusp of the machine age Paris mobs killed off French nobles during the French Revolution of 1789. This tragedy brought research and experiment to a standstill.

But Britain that never killed its patrons fared better. Nobles funded the Stockton and Darlington railway line, originally conceived to be operated with horse-drawn coaches, that inspired Engineer George Stevenson to build the world’s first locomotive engine in September 1825; thereby pushing Britain to beat France in the race for Industrial Revolution.
Morris concluded, in “Why the West Leads-For Now,” that countries that heavily fund their universities and scholars to relentlessly discover newer and better forms of energy, or what he called “Chain of Energies,” would lead. But those that invest heavily in religion, or “Chain of Divinities,” would sink. This is because economic and military powers no longer flow from temple and altar but library and laboratory.

Purging Nigerian Scholars
The highly circumscribed environment permitted our universities led to the formation of the Nigerian Association of University Teachers, NAUT, in 1965. This body demanded for better funding and autonomy for the then five universities. In 1978 the Academic Staff Union of Universities, ASUU, emerged from NAUT. The demands made on the Tafawa Balewa government in 1965 by NAUT were not dissimilar to the ones made on the Muhammadu Buhari government in 2022 by ASUU. Nothing has changed.

France shot itself in the foot purging those who funded education in 1789. Nigeria does the same directly purging its scholars. Professor Emmanuel Osodeke, National President of ASUU, following the 2022 six-month industrial strike by his association, reveals the “exodus of lecturers from the nation’s universities for greener pastures abroad.”

Like France that descended into chaos leading to the costly Napoleonic Wars after silencing its brightest minds, Nigeria is also paying the price battling armed insurgents, energy crisis, food crisis and economic crisis. We rely on Ghana, South Africa and India for education and medicine; meaning that we have lost out to these countries in the Second Industrial Revolution associated with the poverty-stricken countries of the Southern Hemisphere.

Six decades of fruitless negotiations with government should convince our university students, teachers and administrators that they must work together and change things. Besides, there must be an end to how ASUU laments or none takes it serious anymore. Any man whose father fails to train should stop complaining and train himself. Our universities must heal themselves running profitable businesses to generate monies for development.

Professor Turner Timinipre Isoun, Father of Nigerian Space Technology, built Nigerian first Satellite at the Surrey Satellite Technology Limited, SSTL, a commercial arm of the University of Surrey, United Kingdom. Students of this institution worked on the project with their teachers raking in millions of dollars in profit. Harvard University establishes blue chips companies before selling them in the New York Stock Exchange to raise capital. Nigerian students can also work side by side with their professors producing goods and services to create wealth for their universities.

Internally-Generated Revenue, IGR.
Paucity of funds means our universities are not evolving from their traditional teaching job to production. That is weakness. For instance, the only laboratory in Rivers State that gives accurate result in table water analysis belongs to the Department of Chemical/Petrochemical Engineering of the Rivers State University, RSU, former Rivers State University of Science and Technology, RSUST. The National Agency for Food and Drug Administration and Control, NAFDAC, accepts only reports from this laboratory.
Our argument is, if this department can consult for water producers, what stops it from setting up its own bottling plant? At least, let it produce drinking water for the university community so that no other brand will find a ready market on campus. If fund to establish the plant is the challenge then the department can approach a commercial bank for loan. Since all the factors of production are there, what logical thing to do than to produce. It is heartening that the University of Port Harcourt, Rivers State, is already on the path to self-sufficiency in table water production and wealth creation. Its Uniport Bottling Plant, operated by Investment Networths Ltd, can be upgraded and expanded.

Internally generated revenue should be the base fund for our reformed universities so that whatever government is bringing will be but subsidy. For instance, the University of Port Harcourt, Rivers State, has a student population of 40, 000. With each student paying a yearly fee of N45, 000, the resultant N1.8 billion could set the school on a new trajectory if the management controls it.
Government should be honest enough to declare that our universities are generating huge profit as education in Nigeria is not pro-bono. Transparency means monies generated by these institutions should be ploughed back to meet their expenses. Internally generated revenue could be used paying the salaries of non-academic and lower cadre teaching staff. The Federal Government can then take care of the salaries of professors.

If Nigerian universities adapt, they could generate so much income without caring if government exists. This will involve reorganizing the university to profitably run consultancy services, bakery/fast food, commercial farming, filling station, gas refilling plant, table water production, road construction, real estate, etc. This realization means every university must be administered like an independent state with the Vice Chancellor as President and Chief Executive Officer. Three entities are necessary, namely:
(1) Industrial park for production and ware housing.
(2) Board of Internal Revenue to collect and publish generated revenues from businesses. This will comprise of representatives of the faculties, Vice Chancellor Office and the Students Union Government.
(3) Department of Trade and Investment, DTI, will entertain and approve business proposals from departments and external investors. As independent regulator, it will allocate factory sites making it possible for an investor to hit the ground running. Direct investment involves enterprises owned by faculties and their departments. Indirect investment belongs to external investors.

Conclusion
In his 2018 paper, “The University of Africa: In Pursuit of an Innovative and Sustainable University, Responding to the Challenges of a State and Nation,” the erudite Professor Isoun identified attitude, rather than funds, as the number one problem of our public universities. Nigerian leaders see monies channeled into our higher institutions as redundant funds of little economic returns. This explains their reluctance to budget adequately for these schools.

Our genuine fear in this great leap forward is, again, negative attitude. If our professors see the factory floor as beneath them, then there is no way a financially independent university can emerge. They must emulate Professor Isoun, who as pioneer Vice Chancellor of RSUST, worked with his students on developmental projects in the 1980s.

Who are these obidients? By Femi Fani-Kayode

Executive order 10 will deepen democracy, ensure doctrine of separation of...