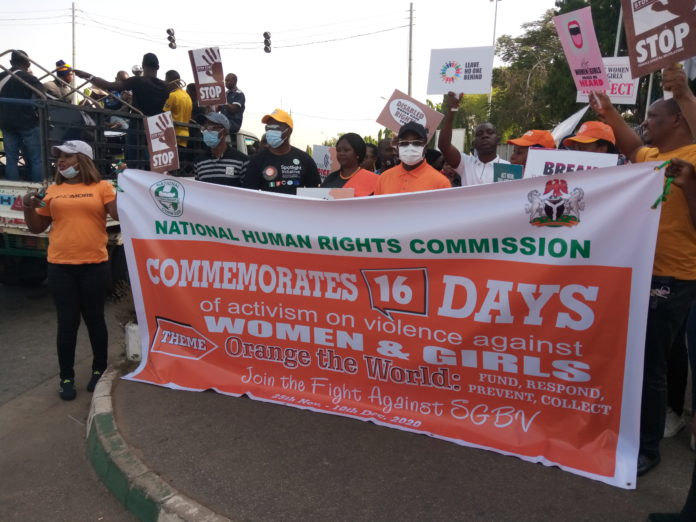 The Executive Secretary of the National Human Rights Commission ((NHRC), Tony Ojukwu Esq has said due to the COVID-19 pandemic and the lock-down that followed, violence against women and girls was exacerbated.

Acccording to Ojukwu, this was seen in the number of reports received from the public by the commission.

Specifically, he noted that between March and June 2020, the commission received and treated about 232 cases of various forms of violence against women and girls, including rape, sexual assaults, domestic violence, and other forms of inhuman treatments from the 36 states including Federal Capital Territory (FCT).

Indeed, the report acccording to Ojukwu indicate that there is no one state that is immune from the global violence against women and girls.

The launch and take-off of the 16 Days of Activism on Violence against Women saw procession from the Eagle square, and culminated at the headquarters of the commission in Abuja.

Speaking shortly after, Ojukwu said women and girls experience various forms of violence notwithstanding the provision of the 1999 constitution of the Federal Republic of Nigeria, pledging to protect, promote and enforce the rights of all, including women and girls, the passage of the Violence Against Persons (Prohibition) Act, and the fact that Nigeria is party to the International Human Rights Treaties, including but not limited to CEDAW, the Maputo Protocol for the Protection of the Rights of Women in Africa.

He cited some forms of the Violence experienced by women and girls to include rape, domestic violence, forced/early marriage, denial of marriage inheritance, physical and sexual assault and female genital mutilation, denial of family inheritance, harmful widowhood practices among other human rights violations and abuses.

He said “To show its commitment to ending the scourge, the commission in collaboration with OSIWA, launched the UNSUB platform which connects survivors of SGBV to service providers and provides information on access to support system for survivors.

“It is our fervent hope that this campaign will create the necessary awareness so that cases of Gender-Based violence can be reported, documented and violators held accountable, while support is provided to the survivors”.

Ojukwu explained that during the 16 days of Activism, the NHRC will engage in constructive advocacy with states to pass laws to outlaw harmful practices against women and girls, make policies that seek to protect women and girls and take a stand against SGBV.