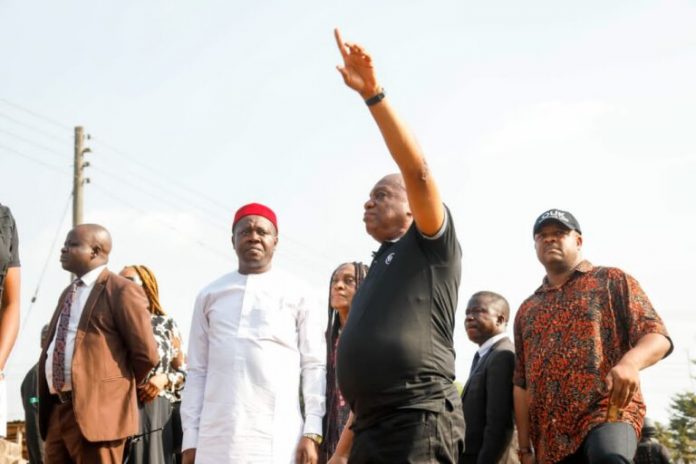 According to  Kalu who presides as the Senate Chief Whip, the inspection exercise was to have an on the spot assessment on the level of work done if they were being executed with the approved standards.

At Okafia-Igbere the former Abia Governor examined the ongoing erosion control project while at Ozua-Abam the ongoing Ozu Abam Township Road was inspected by Kalu and his team.

Speaking at Okafia Kalu noted that the erosion control project which has now reached its advanced stage will go a long way to alleviate the suffering of the people in the area and boost the economic growth of the area. He stated that the project was graciously approved by the federal government to address the perennial problem of erosion at the area.

Kalu, who was on a private visit to Abam, briefly inspected the road project Ozu Abam Township Road which is one of the over 80 road projects currently ongoing in Abia North Senatorial District.

Shortly after he was taken round and briefed on the progress of work by the project manager of the construction company handling the project, the Senate Chief Whip appraised the level of work done.

In a brief address, Kalu noted that the Buhari led administration had been executing infrastructural projects through various government ministries and agencies for the wellbeing of the citizenry.

The senator described the projects as well envisioned, adding that it underscores the administration’s sincerity of purpose and responsiveness in tackling the challenges of its citizens.

He appealed to residents of the area to cooperate with the contractor handling the project so as to achieve a durable and lasting solution to the erosion menace ravaging the area.

Senate confirms appointment of eight nominees as Justices of the Supreme...