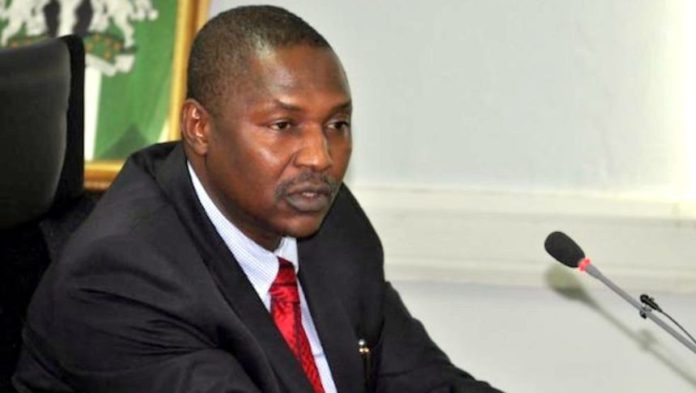 The Attorney General of the Federation (AGF) and Minister of Justice, Malam Abubakar Malami, SAN, has urged the media practitioners in the country to avoid fake news and hate speech in the course of discharging their professional duties.

The AGF made the plea in Abuja while  inaugurating the newly elected executive officers of the National Association of Judiciary Correspondent (NAJUC) held at the Olusegun Obasanjo auditorium of the Federal Ministry of Justice.

According to the minister, media practitioners should respect the sanctity of the ethics of journalism at all time.

He said, “Avoid fake news, hate speech and other practices inimical to the concepts of fairness and objective reporting.”

While describing the election of the officers as historic, Malami further acknowledged the invaluable contribution of judiciary journalists in the development of journalism and enhancement of the coverage of Ministry of Justice activities and the judicial sector.

He assured the association of his ministry’s support for the media in disseminating credible, true, accurate and reliable information devoid of mischief.

Meanwhile, while reeling out the election results, NAJUC Electoral Committee Chairperson, Mrs Wando Sombo of the News Agency of Nigeria (NAN), declared Mr Kayode Lawal of the Herald Newspapers as the winner for the chairmanship position, having defeated his rival, Mr Kunle Olasanmi of the Leadership Newspaper having polled 23 votes and 16 votes respectively.

However, the vice chairmanship position which was keenly contested between Mrs Ifeoma Nwowu of the Radio Nigeria and Miss Tina Iria of Television Continental (TVC) could not produce a clear winner and would be decided through bye-election to be conducted later.

In his acceptance speech, Lawal thanked the minister for finding time to inaugurate the officers and promised to sustain the cordial relationship between his ministry and the media.

The new NAJUC chairman also urged members of the association to support his administration, reiterating that his administration would strive to ensure regular training and retraining of members to improve on their skills of court reporting.