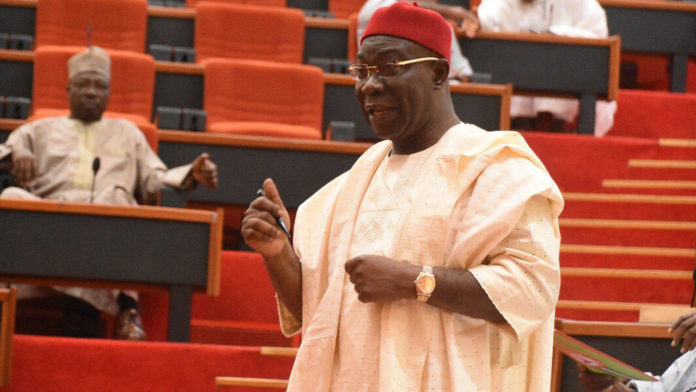 Anambra government says one of the property listed in the Nov 4 interim order of forfeiture granted by a Federal High Court, Abuja to the Economic and Financial Crimes Commission (EFCC) belongs to the state.

The state government, through its counsel, Chuks Igbinedion, told Justice Inyang Ekwo on Monday at the resumed hearing in the matter.

In the affidavit to show cause why the property should not be forfeited to the Federal Government deposed to by Amah Kalu, a litigation secretary in Igbinedion’s law firm, Anambra government said “the property listed as No. 1 in Schedule “A” in Page 2 of the interim order granted on 4th day of November, 2022, known as No 14/16, Charles Street, GRA Enugu” belonged to the state.

The lawyer said the property neither belonged to Sen. Ike Ekweremadu nor his wife, Beatrice Ekweremadu, including Power Properties Ltd.

Kalu, who said that Enugu State was created from old Anambra by the then Head of State, General Ibrahim Babangida, on Aug. 27, 1991, said the sharing of assets between the two states was in a white paper published by the Federal Government.

According to him, in the said white paper, the Federal Government inter alia; directed that the ownership of five residential houses in Enugu hitherto jointly owned by both states, should be transferred to the Anambra State Government to be used as guest houses.

He said Anambra government and Ekweremadu are currently before Enugu State High Court over the ownership of the building.

The lawyer, who said that FHC Abuja lacked jurisdiction and competence to forfeit the property to the Federal Government, prayed the court to delist the house as part of the property belonging to Ekweremadu.

Uni-medical Healthcare Limited, in its affidavit to show cause deposed to by its Regional Manager, Mr Onyebuchi Michael, also urged the court to discharge the interim order made against “the property in No. 7 to Schedule “A” of the application.”

He said the company bought the property from Power Properties Nigeria Limited in the sum of N300 million in August 2021 and the perfection of the title was completed on March 24, who he said predated the EFCC’s application dated and filed on July 27.

However, in a motion on notice marked: FHC/ABJ/CS/1242/2022, filed by Chief Adegboyega Awomolo, SAN, Ekweremadu’s eldest child, Lloyd, prayed the court for an order setting aside the Interim forfeiture order on his father’s property and companies.

The motion, dated and filed on Nov. 21, had Lloyd as applicant and EFCC as sole respondent.

Lloyd, in a four-ground argument, said that the facts In support of the the EFCC’s ex-parte originating motion “deliberately and fraudulently omitted very critical facts/evidence, which negate the granting of the application.”

He argued that the motion which the anti-graft agency commenced the action was filed in absolute bad faith.

According to him, the originating motion ex-parte was an abuse of judicial process, oppressive, intimidating and unfair to the parties interested in the property forfeited in the interim.

He said, “the originating motion ex-parte was initiated with the expectation that Sen. Ike Ekweremadu and other persons interested in the property be denied of their right to fair hearing,” Lloyd said.

When the matter was called for hearing on Monday, counsel to the EFCC, Sylvanus Tahir, SAN, said he was yet to respond to the processes filed by interested parties in the matter.

Tahir prayed the court for an adjournment.

Justice Ekwo consequently adjourned the matter until Dec 15 for hearing.

The judge made the order following an ex -parte motion filed and moved by the anti-corruption commission’s lawyer, Ibrahim Buba.

Ekwo, who granted the motion, ordered the anti-graft agency to publish the interim forfeiture order of the property in a national daily within seven days and that interested parties should show cause within 14 days of the publication why the property should not be permanently forfeited to the Federal Government.

NAN also reports that Ekweremadu and his wife, Beatrice, are currently in custody in the United Kingdom (UK), over allegations bordering on organ trafficking of David Ukpo, who is said to be a minor.