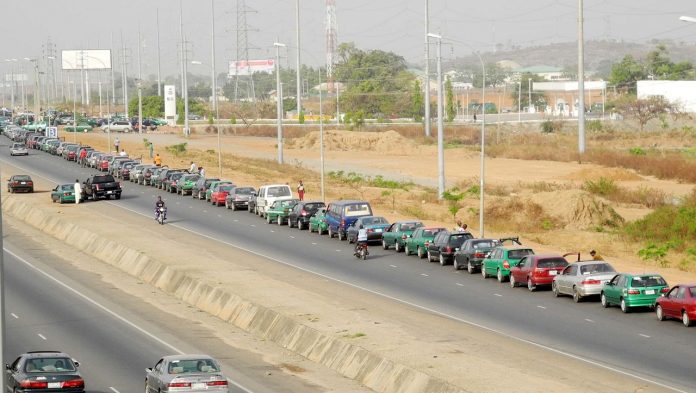 Most fuel stations in Abuja are still clogged with vehicles and long queues as petrol scarcity continues to bite harder in the FCT.

Correspondents of the News Agency of Nigeria (NAN) who monitored the situation at the federal capital on Saturday report that long queues were noticeable at fuel stations as early as 5 a.m.

Fuel stations belonging to major marketers and those belonging to the state-run Nigerian National Petroleum Corporation (NNPC) had long queues stretching to the highways in some cases.

Some motorists who spoke with NAN expressed worries and anxiety as to the day the scarcity would end.

Mr Ifeanyi Chukwudi, a motorist, blamed the NNPC for not explaining to Nigerians the reason behind the fuel scarcity even after promising to inject 2.1 billion litres of petrol into the system by the end of February.

“Today is Feb. 26; the queue in Abuja is unprecedented since the coming of this administration; we have not witnessed such queues; so what is responsible? The NNPC should explain,’’ he said.

Mr Biola Akande, a taxi driver said he got to the fuel station as early as 5 a.m., but met a long queue, adding that such development would not augur well for the country and the economy.

He urged the Federal Government to as a matter of urgency provide lasting solution that would end the long queue.

On Feb.16, Group Managing Director of the NNPC, Mr Mele Kyari, promised that the scarcity would end by the end of February.

He made the promise before the House of Representatives Committee on NNPC (Downstream), investigating circumstances surrounding the importation of adulterated fuel into the country.

The current fuel scarcity had been blamed on the importation of adulterated petrol and the withdrawal of same after it had damaged many vehicles.

Buhari economic team not in tune with realities of Nigeria -Smart...